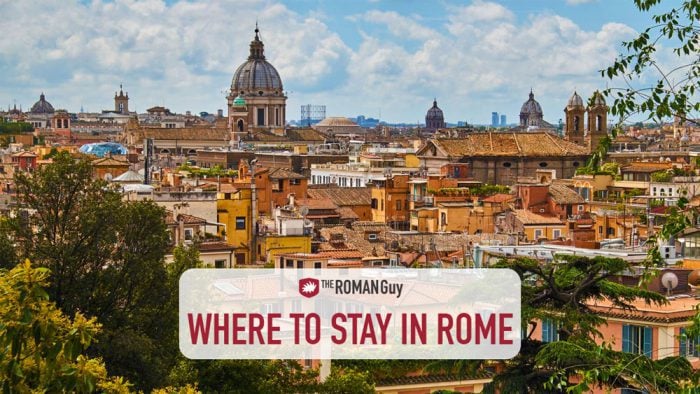 Deciding where to stay in Rome is no easy feat. Rome has 22 districts, or rioni. Each neighborhood has a distinct personality, price tag and atmosphere to consider when you pick your temporary home in Italy’s capital city. This guide will provide you with the key info you need to decide where to stay in Rome.

Join our outstanding English-speaking guides on one of our best-selling Rome tours of the Colosseum, Vatican Museums and much more. See for yourself why we’ve earned thousands of five-star reviews on TripAdvisor.

While there are 22 rioni, or districts, in Rome, most visitors to the Eternal City stay in less than half of these. Deciding where to stay in Rome is easier once you’ve narrowed your choices down. 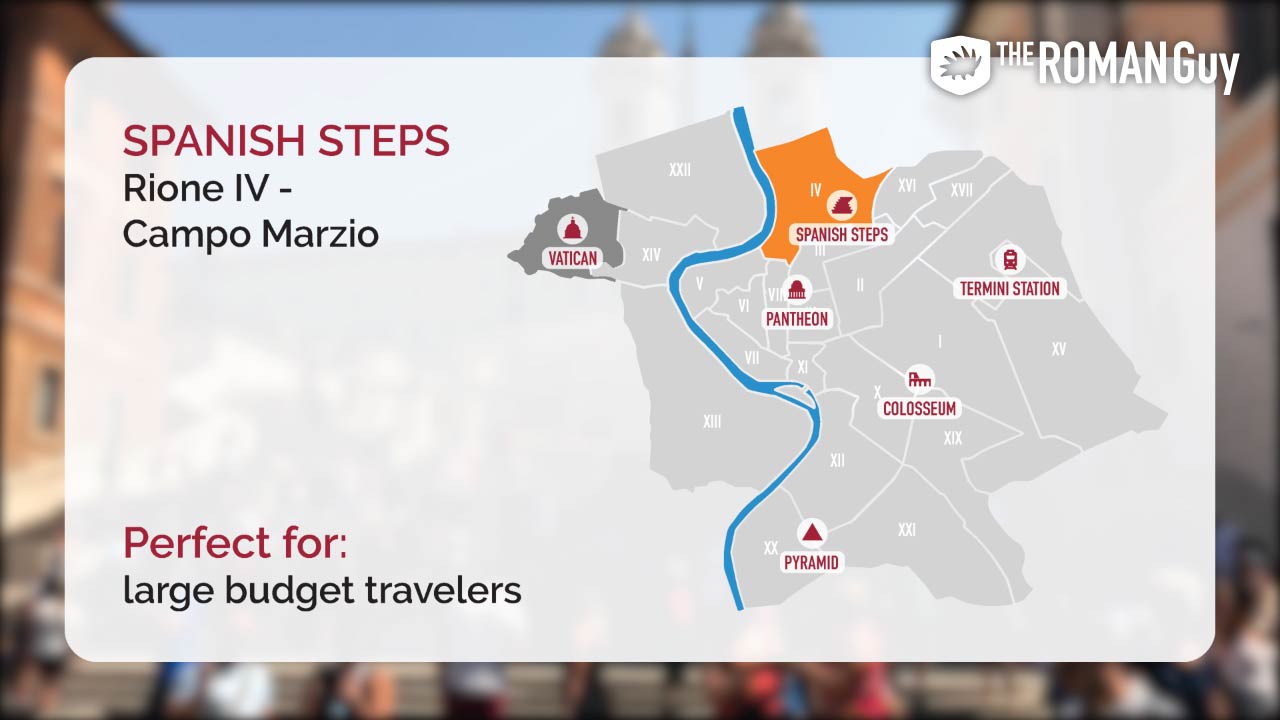 The Spanish Steps and their surrounding neighborhood are widely regarded as the most beautiful part of Rome. Neoclassical buildings in beautiful condition line the streets. Home to most of the major sites first-time visitors to Rome want to see, staying here is advantageous.

Simply walk out the door and find yourself instantly immersed in the gorgeous and historic heart of the Eternal City. This is THE main shopping district in Rome. If you’re a fashionista, Via Condotti hosts some of the best haute-couture shopping in Europe. 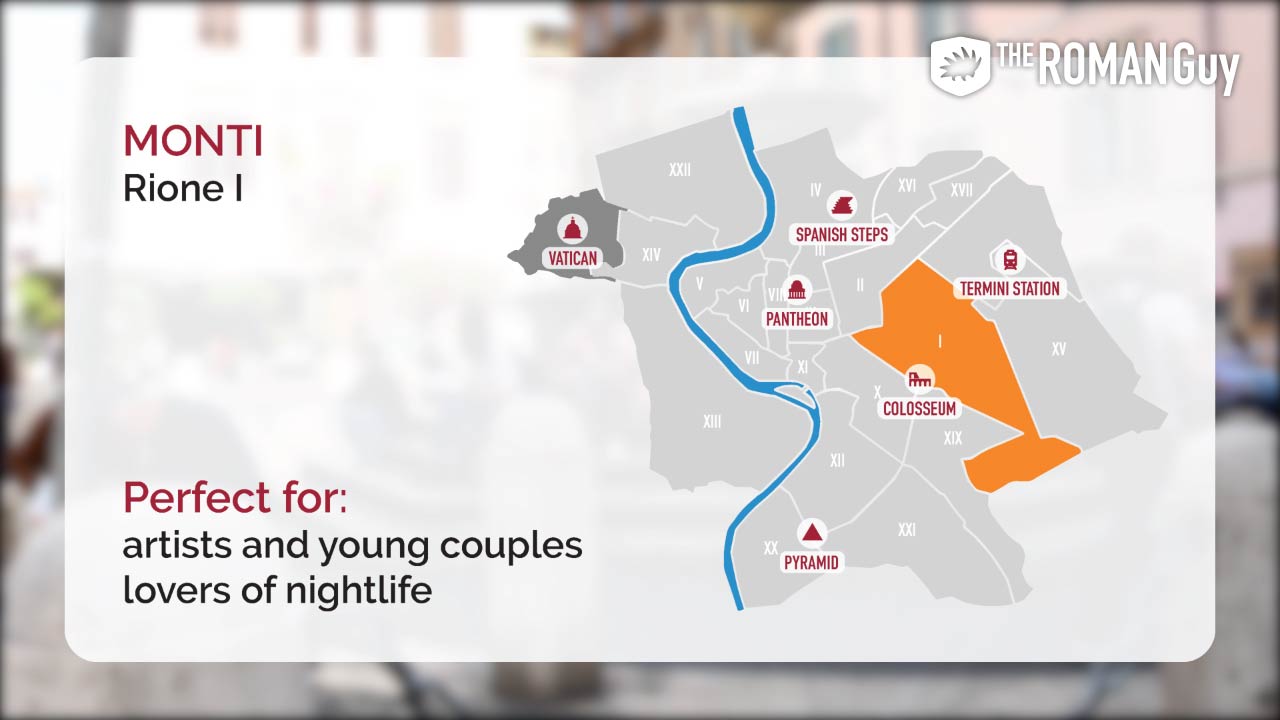 A hipster hotspot, Monti is filled with artists and Romans lucky enough to inherit apartments along the pastel-colored streets. Despite the fact that Monti borders Rome’s major tourist attractions like the Colosseum, the neighborhood is a quiet treasure. The name “Monti” translates as “mountains” in English. The area was home to four of the seven famous hills that once made up the city of Rome. If your idea of a good time is exploring vintage clothing stores, consider staying in Monti. 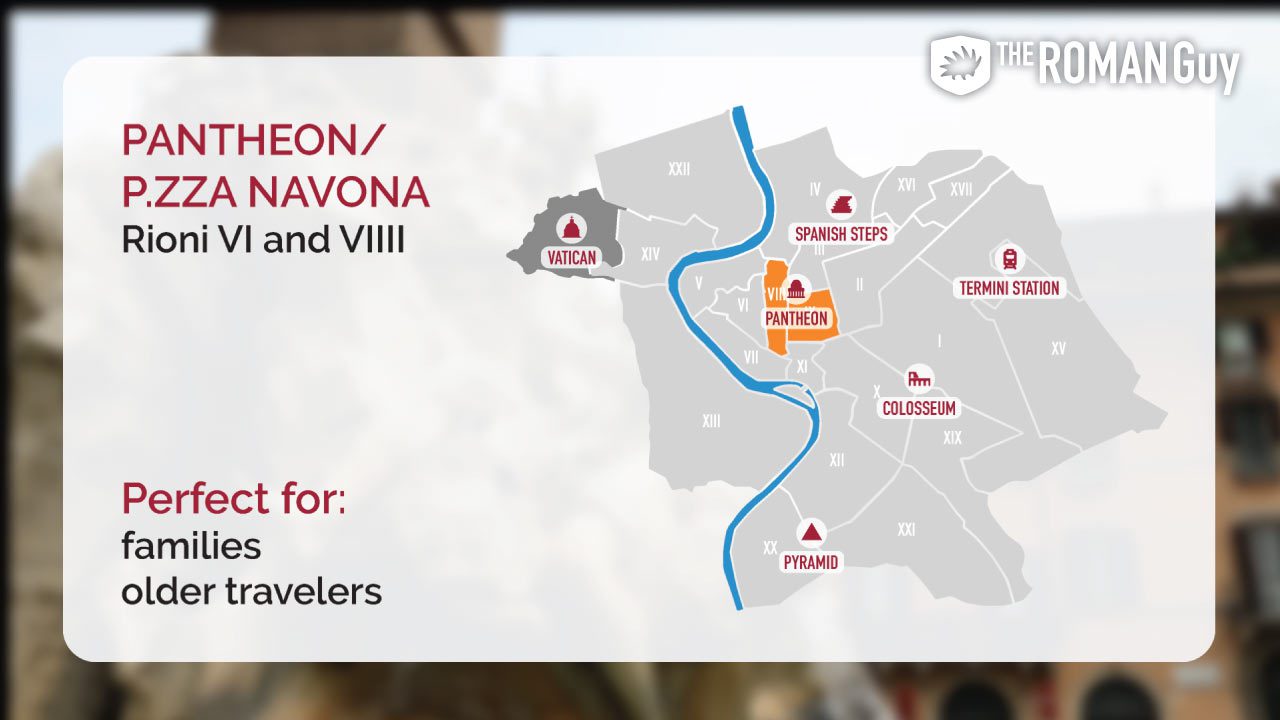 Rome’s most enchanting neighborhood is centered around the Baroque-style Piazza Navona. From well-kept Renaissance architecture to impressive fountains, this area is a sensory overload of beauty. Piazza Navona and the Pantheon could easily be split into two areas, but they share many features. Like the Spanish Steps, this is the spot for luxury. The rates are among the highest in Rome for posh hotels, chic B&Bs and upscale private apartments. 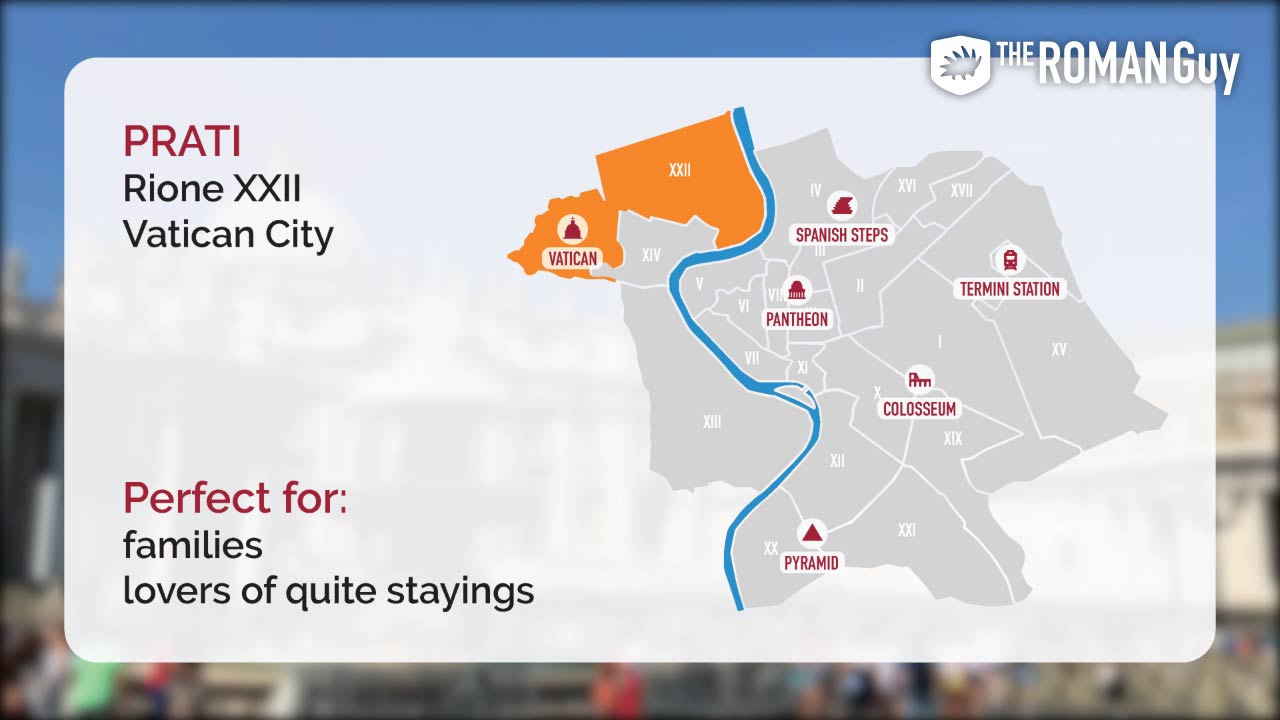 Across from Vatican City lies Prati, a calm and elegant modern Roman neighborhood. Perfect for anyone planning a religious trip or for groups of elderly people who might encounter trouble with old buildings that lack elevators, Prati is one of Rome’s best-kept secrets.

This is also one of the few districts in Rome not overtaken by tourism. This is surprising because the Vatican and St. Peter’s Basilica are located right here. The neighborhood also doesn’t look like a typical postcard of Rome, but it doesn’t lack charm with its modern European charm and its high-end shopping street, Via Cola di Rienzo. 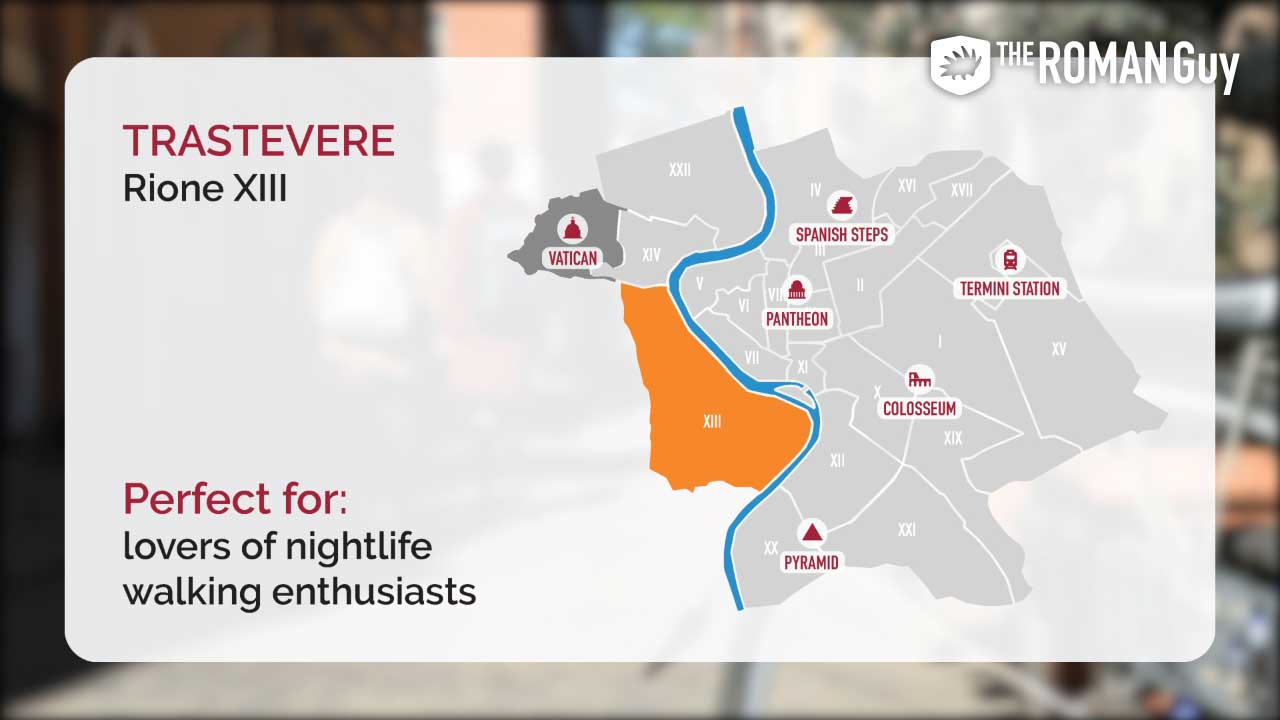 Trastevere, whose name translates to “beyond the Tiber”, is a charming, bohemian neighborhood. Filled with great spots for food and drink, plus a plethora of independent shops, the atmosphere is hip and social. Trastevere has a buzzing nightlife scene for tourists and locals alike.

In fact, our best Rome food tour takes place right here, exploring the best food in the neighborhood. Stay here if your idea of a perfect neighborhood is more offbeat than glamorous, and you enjoy a lively and friendly atmosphere with picturesque cobblestone streets.

e and my better half planned to move to Spain in the Canaries next year. We were thinking about where to move whether Tenerife or Gran Canaria. But I like Gran Canaria more because the place seems wonderful like what I read in this article here in https://www.canaryislandsinfo.co.uk/gran-canaria/ … Is there any advice you can give me on this two-island? Thanks

It was great reading your blog, very nicely executed. I haven’t visited Rome yet, but after reading your blog, would surely love to visit ASAP. Thanks for sharing such a fantastic blog and awesome pictures. I am a blogaholic, today I have read a blog and would like to share https://www.benvenutolimos.com/blog/best-neighborhoods-rome-stay/

Ciao Kathleen! Thanks for your comment, and we’re very happy to hear that you enjoyed this blog. You should definitely visit Rome ASAP, you’re gonna love it! We’d love to welcome you on one of our many Rome tours during your stay. Hope to see you soon in the Eternal City!

Awesome guide!!
I was wondering where to book my hotel and this helped a lot 🙂

Ciao Sofia! Glad we could help you!

This is one of the most helpful blog posts I’ve seen when looking for information on where to stay in Rome. The info graphics are super helpful because it’s a visual – all the other blogs just have written information and don’t seem objective towards all areas. Thanks!