Have you ever wondered what life in ancient Rome was really like? The preserved city of Pompeii is the perfect venue. When Mt. Vesuvius erupted in 79 AD, Pompeii was a lively town of around 11,000 people with bustling markets, taverns and a 20,000 seat amphitheater. On that fateful day, the city was forever preserved in volcanic ash as a spectacle of history.

While the information we provide here is free, we also sell tours at very reasonable prices. We lead all kinds of day trips from Rome. Our Rome to Pompeii Day Trip brings Italy’s rich history and stunning Gulf of Naples views to life. Considering making your experience in Pompeii a memorable one with The Roman Guy.

Pompeii is a city in southern Italy made famous by the eruption of Mount Vesuvius in A.D. 79. Before the eruption, Pompeii was a booming empire, known for its bustling culture and large 20,000 seat amphitheater. When Vesuvius erupted, the volcanic ash shielded the city’s artifacts from destruction and preserved a ton of history. To this day, you can still see some of the bodies, clothes and even places of business that have been preserved from the eruption.

How to See Pompeii in a Day:

If you are traveling from Rome, you can begin your journey as a Plebeian or a Patrician. As a Plebeian, you would take the train to Naples. As a Patrician, you would venture to Naples by means of private luxury transportation (don’t worry, our day trips are not priced for those solely of the top tiers of Roman society).

Take the train towards Sorrento and you will arrive at Pompei Scavi – Villa Dei Misteri station after about 20 minutes. The station is only a matter of feet from the entrance into the archaeological area.

If you choose to take the train to Pompeii on your own but are still looking for a guided tour, check out our Skip the Line Pompeii Ruins Tour with Villa of Mysteries.

By Private Transport: A great way to see Pompeii is on a day trip. This trip includes roundtrip transportation from Rome, a 2-hour tour of Pompeii, as well as a visit to Sorrento. If you happen to be staying on the Amalfi Coast on the next leg of your trip we offer private transportation to your accommodations with a stop in Pompeii as well.

Once You’re in Pompeii 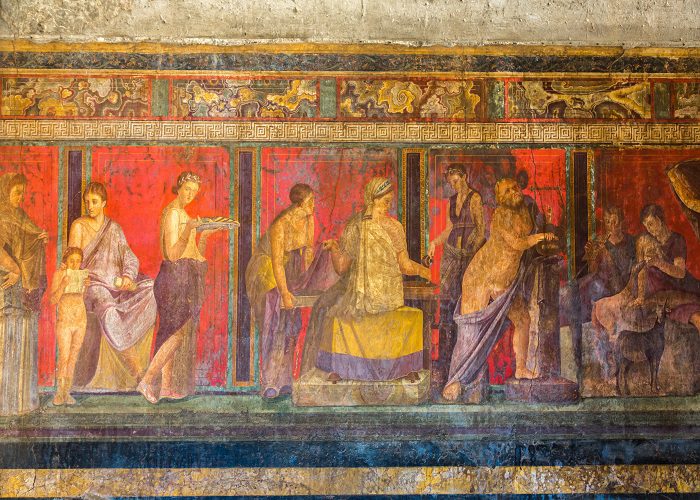 From the train station, the entrance to the archaeological site is only a 2-minute walk. Taking a guided tour or getting a guidebook will greatly help you explore the ancient city. Though the old grid is intact, the street signs are not modernized, making it easy to get lost without a map. A tour with a local guide is the best way to fully experience Pompeii.

On the grounds of the ancient ruins you should make a point in seeing the following sites:

The oldest known building of its kind, the amphitheater of Pompeii held 20,000 people and was host to gladiator games and large spectacles just like the Colosseum in Rome. The stone structure is a great example of the large functioning society in the ancient town.

The Forum of Pompeii

Just like the Roman Forum, the Forum of Pompeii was the center of activity and commerce in town. It is where you will today find the city’s major Temples; the Temples of Venus, Apollo, and Jupiter. You will also find the grand Forum Baths there.

One common misconception is all ancient peoples were dirty and rarely bathed. In many cases this is true, but the ancient Romans were not this way. Though only the very rich could afford private baths, the public baths in the Forum were for people of all social statuses. The area was divided into men’s and women’s sections. It included the three rooms of the ancient Roman Bath, the tepidarium (warm bath), caldarium (hot bath) and frigidarium (cold bath). Classically one would bathe in each room in that order.

The world’s oldest profession had its place in ancient Rome, and the most evident example of this in Pompeii can be found in this building. Consisting of many small rooms with beds, the building also is covered with fascinating explicit images of the actions taking place at the brothel.

If you’re from Philadelphia, you will recognize the word palaestra from The Palestra on the campus of the University of Pennsylvania. Palaestra is the Latin word for “gym” and was similar to a modern-day gym consisting of areas for training and even a swimming pool.

The Anfiteatro was not the only center for entertainment in Pompeii. The large theatre held about 5,000 people and hosted its own share of shows and ancient entertainment.

Also used for rain delays at the Large Theater, the gladiator barracks is where those who train for the gladiator matches at the Anfiteatro.

A rotating exhibit around Pompeii, these casts were created during the excavations of the ruins. These are an amazing display of people in the positions they were in when they were encased in ash on that fateful day.

After your time in Pompeii and want to experience more of this history, you can feel free to climb Mount Vesuvius to see the source of the tragedy or head to Herculaneum to see more very well-preserved antiquities. You can also get right back on the Circumvesuviana to Sorrento and enjoy a spritz overlooking the immaculate Bay of Naples.

The Best Way to Experience the Gulf of Naples

The Gulf of Naples is a beautiful stretch of land that offers gorgeous panoramic views of Italy’s coast and a glimpse into the tragic history of the city of Pompeii. The most spectacular view of the bridge is along the river bank. Here you can stand in awe over the beauty of its structure and even notice a few peculiarities. To best experience the Gulf of Naples, take our Pompeii and Sorrento day tour from Rome.

Looking for a worry-free way to experience untouched ancient Roman civilization? The Roman Guy will make ancient Pompeii come alive right before your eyes with a professional local guide and private driver when you book our Pompeii & Mt. Vesuvius Day Trip leaving from Rome. Check out other Roman Guy tours at theromanguy.com so you can sit back, relax, and create memories that you’ll cherish for a lifetime. 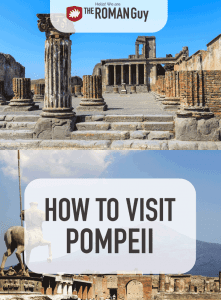 How to Pronounce San Gimignano

Venice for Families: What to do & Where