Home > > The Ultimate Guide to Day Trips from Rome by Train: Look no further!

Rome is the perfect base for your Italian adventure. Why? It’s central location allows you to spend more time exploring, and less time on a train. Perhaps you’re hoping to experience Italy’s capital city but also small town life?

Interested in local foodie culture and wine tasting? Or, are you more attracted to the ruins of ancient Roman civilizations? Here are five of the best day trips from Rome by train. Pack your bags and let’s go on an adventure.

If you just so happen to find yourself in Florence instead of Rome and looking for Day trips, we got you covered as well with our Best Day Trips from Florence! If you would prefer us to do the work for you, then check out our Day Trips we have running and you can just sit back and relax and leave the heavy lifting and thinking to us.

During your visit to Rome, why not take advantage of an underrated, less crowded destination. Ostia Antica which is Rome’s answer to Pompeii, is just 30 minutes from the city center.

Today, you can visit the ruins of this remaining Roman civilization. For the full effect of “Rome’s Pompeii”, join us on our Ostia Antica tour.

The top attractions to see are the wonderfully preserved amphitheater, Terme di Nettuno (2nd Century baths complete with mosaic floors), and the Thermopolium, the remains of a café in which you can still see traces of a menu frescoed on the wall.

This is the oldest town in Umbria. The first settlements date back to the Paleolithic era. Then, in the 4th Century B.C., Rome conquered the land.

Today, it is a spectacular medieval town. In the winter, Gubbio is home to the world’s largest Christmas tree, seen from Mount Ingino. Other highlights include the main square (Piazza Grande), a Roman Theater, and last but not least, the Colle Eletto cable car.

Not for those who have a fear of heights, this cable car is essentially an open-air cage that takes you to the top of Mount Ingino with the sweeping landscape below you. Adrenaline with a killer view? Sign me up!

This beautiful town is perched on a rock, caused by an ancient volcanic eruption.  Because of the natural fortress created by its elevation, many civilizations tried to conquer the area in its history.

Today, it is one of the most popular day trip options from Rome for a variety of reasons. For instance, the Duomo, which is a symbol of the city itself, is one of the most striking you’ll see in all of Italy. Don’t believe me? The interior holds frescoes which are said to have inspired Michelangelo.

Other highlights include seeing the underground caves and tunnels built by the Etruscans. For a great meal in between your adventures check out Trattoria del Moro.

A coastal city surrounded by the sparkling blue sea and mountains in the distance, Gaeta is off the radar for most tourists. For one simple reason: there is no train station so many guide books don’t include it in their recommendations.

However, don’t fall into the trap, it is a simple journey from Rome and well worth it.

The history of Gaeta goes as far back as Greek mythology. In the Roman era, it was a popular vacation destination for wealthy Romans. The subsequent years saw siege after siege, most likely because of its desirable location.

Today, it is still a popular summer resort town for all Italians. There are a total of 7 beaches, with Serapo Beach being the most popular. What’s more, it is one of the southernmost towns in Lazio so it is a great option for those travelers who want to stay close to Rome and still experience a southern Italian town.

Don’t miss the Grotto del Turco and Montagna Speccata (Split Mountain). Legend has it that the mountain split in two at the exact moment Christ died.

The “Roman Castles” are a group of 13 towns at the feet of the Alban Hills. After Rome’s elite started using this area for their summer villas, the Pope caught on. In 1596, the Vatican acquired a villa in Castel Gandolfo, a town in the Castelli Romani and consequently became the Pope’s summer residence which is still operational today.

There are two towns that I would recommend visiting; the first is Castel Gandolfo, as mentioned above. Aside from the Pope’s residence, it’s famous for porchetta (pork roast) and charming streets. If porchetta isn’t up your alley, stop for lunch at  Hostaria la Fraschetta di Padre in Figlio.

Frascati is the other town well worth a visit. This hillside masterpiece is known for their white wine and welcoming atmosphere. Highlights include Villa Torlonia and a wine tour/tasting at a local producer’s vineyard.

For an unforgettable lunch experience, head to a fraschetta – a special type of restaurant in this area. It’s a casual (understatement of the year) cantina where you sit down, tell them if you want a medium or large carafe of wine, and you eat the food you bring yourself.  Do as the locals do and go to one of the several porchetta food trucks and indulge on the local delights in la dolce vita. Try Osteria dell’Olmo.

If you’re looking for a beach day away from the city, there’s no place better than the Amalfi Coast. Check out the beautiful sounds and pearly blue water rolling on to the shore. There’s plenty to see! 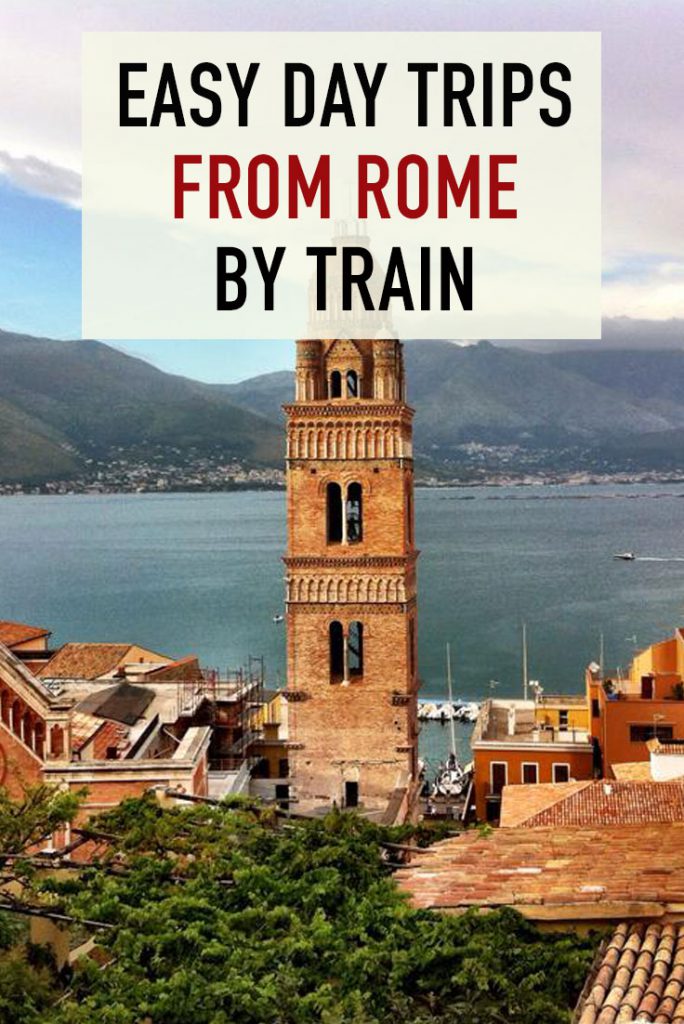