Home > > What are the Seven Hills of Rome?

Looking at Rome today, you can see that it’s surrounded by hills and mountains, but the city itself seems pretty flat. However, it was originally made up of seven separate hill settlements, all of which joined together to make up Rome. These seven hills played a major part in the city’s rich history. Over time, as the valleys between them were built upon, and the ground’s peaks and troughs have got a little lost in the chaos that is central Rome, and some of the hills are barely even noticeable. Here’s a guide to the seven hills of Rome and their history. 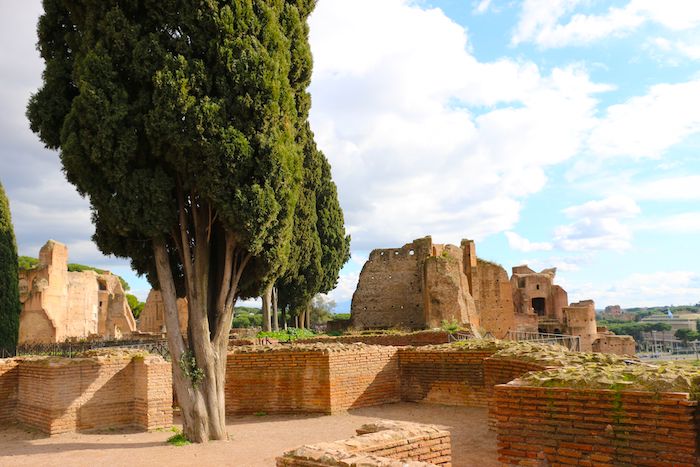 According to Roman mythology, Romulus and Remus were abandoned in the Tiber River and were saved thanks to a she-wolf who suckled them. As they grew older, they argued over where to establish a new city, with Romulus vying for Palatine Hill and Remus preferring the Aventine Hill. Eventually, Romulus killed Remus and laid the foundation for the city on Palatine Hill, bringing the city into existence on April 21st, 753 BCE.

During the Republican period, many rich Romans had houses on this hill, but by the Imperial era there was just one huge palace for the emperor – in fact, the English word ‘palace’ is taken from Palatine.

Entry to Palatine Hill is ticketed, but it’s worth the money. The area is so vast that you’ll need an entire afternoon to see it properly! 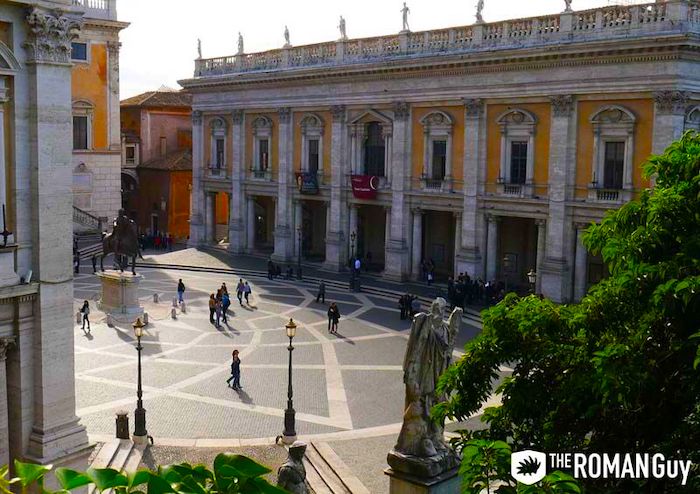 Capitoline Hill, overlooking the Roman forum, was one of the most important areas in the Roman era, housing Temple of Jupiter Best and Greatest, the Temple of Juno and the Tabularium. Over time, it has retained that importance – in the 16th century, the hill was landscaped by Michelangelo to include concentric designs on its pavement and the rand Cordonata ramp staircase seen from Piazza Venezia.

Today, it’s the site of Rome’s mayoral buildings and the Capitoline Museums, which hold many Roman treasures – if you head to Piazzale Caffarelli, you’ll be rewarded with an excellent view across Rome’s rooftops from the hill’s highest point. 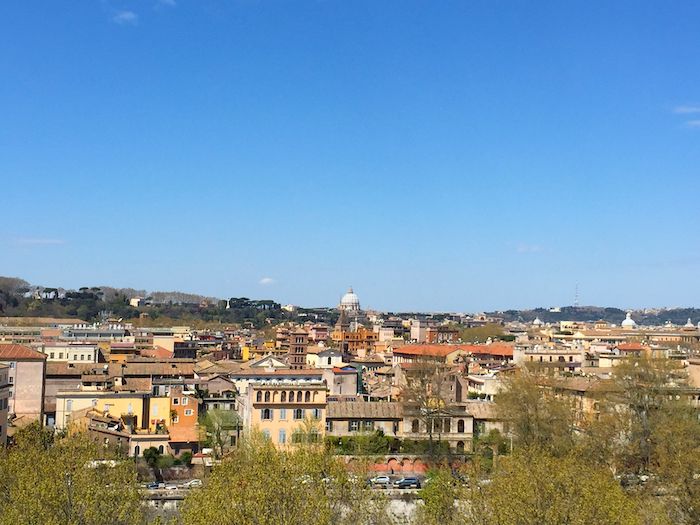 Aventine Hill, just off the Circus Maximus, boasts some of Rome’s most interesting views and attractions. Largely a wealthy residential area now, its main interest for tourists is the Basilica di Santa Sabina all’Aventino, one of the oldest basilicas in Rome, built between 422 and 432.

The church’s orange grove is one of the hill’s highest points, with a spectacular view across the city with the Vatican at its center. There’s also Rome’s rose garden, which is worth a visit during springtime, and the Knights of Malta keyhole in Piazza dei Cavalieri di Malta.

Caelian Hill, pronounced ‘Chellian’, is a leafy area to the south of Rome providing a little respite from the usual throngs of tourists. It was once the residential district of Rome’s wealthy families – the Beverley Hills of Rome, if you will – and evidence of elaborately decorated villas has been discovered beneath the ground. 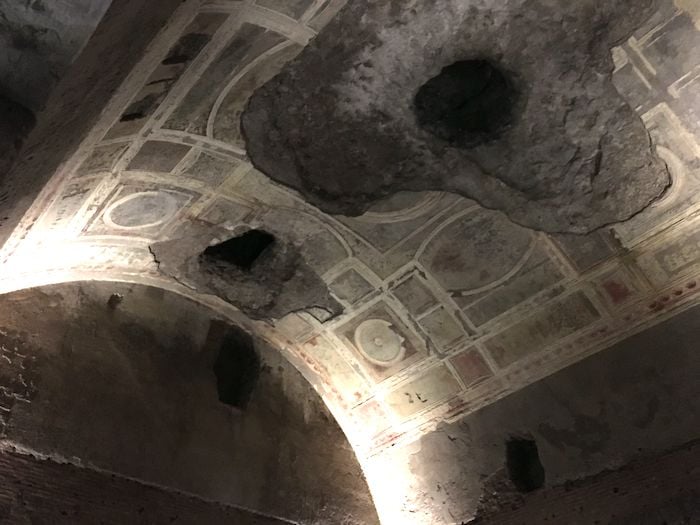 Wedged in between the Termini station and the Colosseum is Esquiline Hill, most famous for being where Emperor Nero built his extraordinary Domus Aurea, Golden House – the grandest villa built in Roman civilization. After the palace was finished, Emperor apparently exclaimed: “Finally, a palace worthy of my presence.” This may hint at the extravagance of the palace, but also Nero’s pompous attitude.

There are other attractions on this hill, including the ‘Arch of Gallienus’, which is one of the original Republican city gates, which can now be easily overlooked after being rammed unceremoniously between modern buildings.

Today, the Esquiline Hill is topped with the beautiful Santa Maria Maggiore, one of the four papal basilicas of Rome, and the largest church dedicated to the Virgin Mary in Rome. 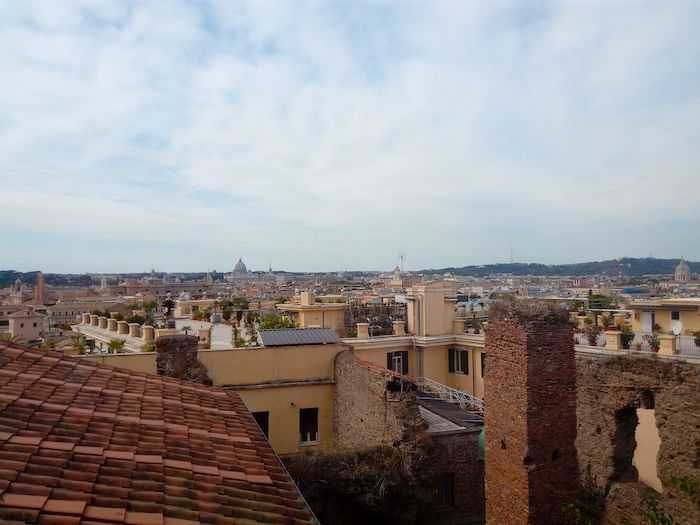 The highest of the Seven Hills, Quirinal Hill is the seat of the President of the Italian Republic who lives within the Palazzo del Quirinale. Originally it was part of a group of hills that included Collis Latiaris, Mucialis and Salutaris, but these have all since been lost due to the building from the 16th century onwards.

The hill first became part of Rome, along with the Viminal Hill, during the reign of Servius Tullius in the 6th century B.C. Right in the middle of Rome’s bustling center, this hill doesn’t really feel like a hill at all. In fact, it’s difficult to believe that years ago this was the highest summit in Rome. Nearby attractions include the Trevi Fountain, Palazzo Barberini and Via del Corso, the city’s main shopping street.

It is the smallest of Rome’s Seven Hills, marked by the central Termini station. It’s also the site of the Baths of Diocletian and the Palazzo Massimo, an awesome collection whose highlights include the beautiful frescoes from the so-called House of Livia, and an array of very famous statues including Augustus as Pontifex Maximus, the Terme Ruler and the Terme Boxer.

You got that right! We love providing you with free information for you to have the best Roman adventure possible, but we would love more than anything to give you the full scoop in person. Check out our selection of Rome tours to pick which experience is best for you.

Best Rome Tours to Take and Why: Guide to Rome’s Experiences with Videos + Map