How to Get Accademia Gallery Tickets 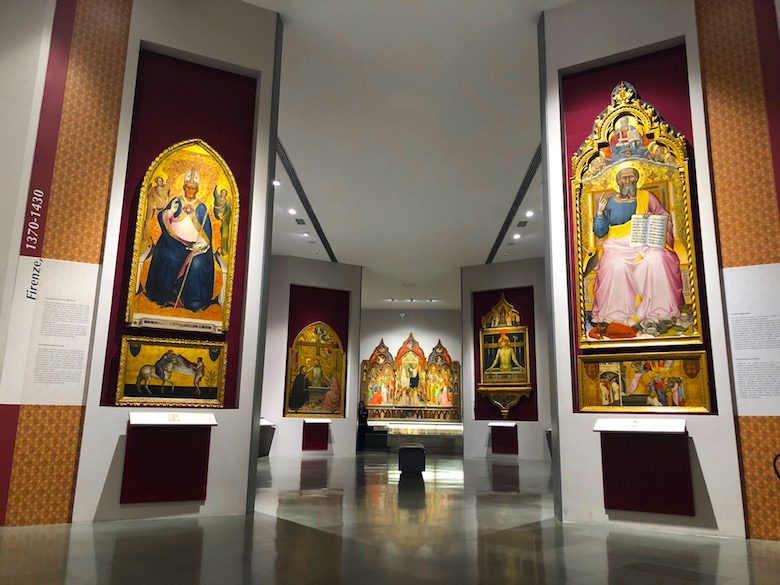 The Accademia Gallery is most widely known for exhibiting the authentic version of Michelangelo’s David. While planning a trip to Florence, a must-see for travelers typically includes a visit to David’s home. But what other hidden gems are featured in the second-most popular museum in Florence? This guide will provide information on visiting the Accademia’s prestigious repertoire of Renaissance classics and how to get Accademia gallery tickets.

Here’s a comprehensive list of all of our tours that visit the Accademia Gallery: 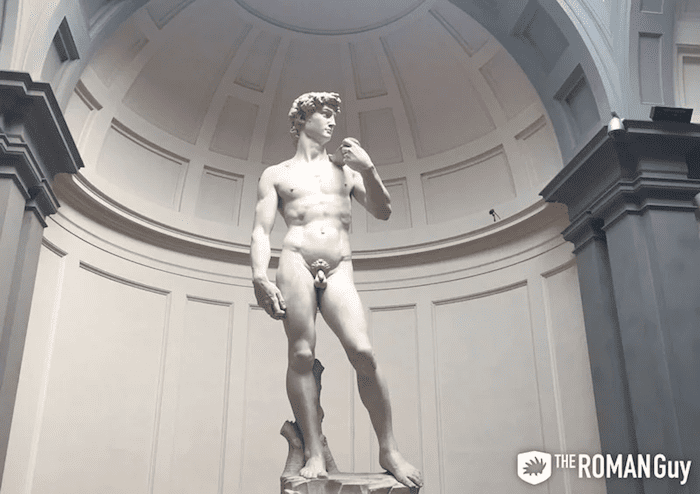 As a revolutionary Renaissance masterpiece, Michelangelo’s David is prominently displayed in one of the main hallways in the Accademia. The prominence of Florence’s rise to prosperity and wealth is paralleled in size to the colossal 17-feet-tall statue exemplifying David’s strength and stamina.

For those of you that don’t know the story of David, it comes from the biblical tale of David and Goliath. David saves his town by heroically defeating one of the giants, Goliath, in an unforeseen battle. Most interpretations of the scene portray David with the head of Goliath by his feet, but Michelangelo’s raw depiction of David’s courage before the fight is eminently described in this rendition.

You might be curious about what other noteworthy pieces the Accademia has to offer. After all, the size of Michelangelo’s David isn’t large enough to fill an entire gallery. 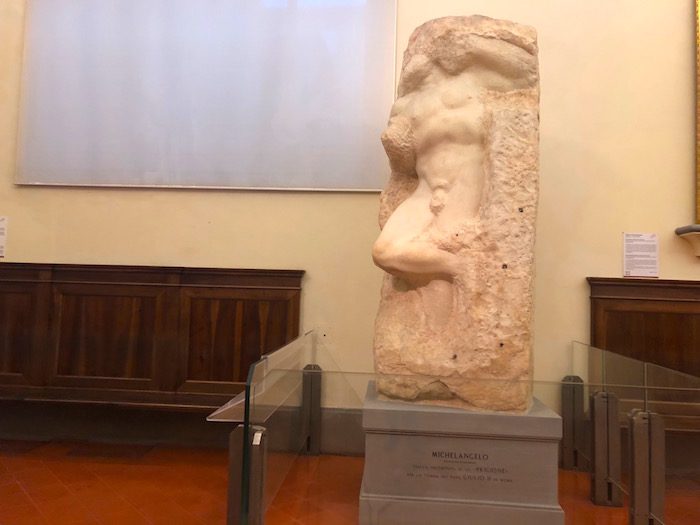 Yes, Michelangelo’s mastery of marble sculptures surpasses his rendition of David. The Accademia showcases four incomplete statues created by Michelangelo shortly after the completion of David. Around 1505, he was commissioned to sculpt a tomb for Pope Julius II. After stopping for a few years to produce the Sistine Chapel, he resumed his work on the tomb—even after the Pope’s death. Although the Pope had envisioned 16 slave statues, Michelangelo only completed 2 of them and left 4 unfinished.

These statues are prime models for non-finito, a method depicting the difficulties in sculpting with marble. The partial nature of the bodies’ physique eludes to the internal weight of the material world stunting the physical world. 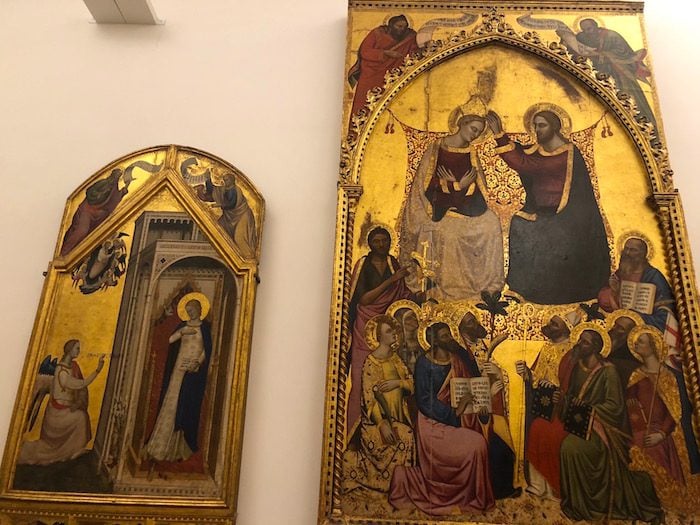 One of the most famous paintings is the Coronation of the Virgin featured in a hall of the Accademia. Originally created as a 12-panelled masterpiece, this particular panel depicts Christ and the Virgin along with ten saints and two prophets beautifully garnished in gold. In the story, Christ crowns Mary as the Queen of Heaven. During the 14th century, the Christ and the Virgin are popular subjects represented in Renaissance art.

Jacopo’s interpretation of the story utilizes iconic Renaissance perspective, structure and detailing, making a visit to this masterpiece worthwhile to any trip.

Rape of the Sabines 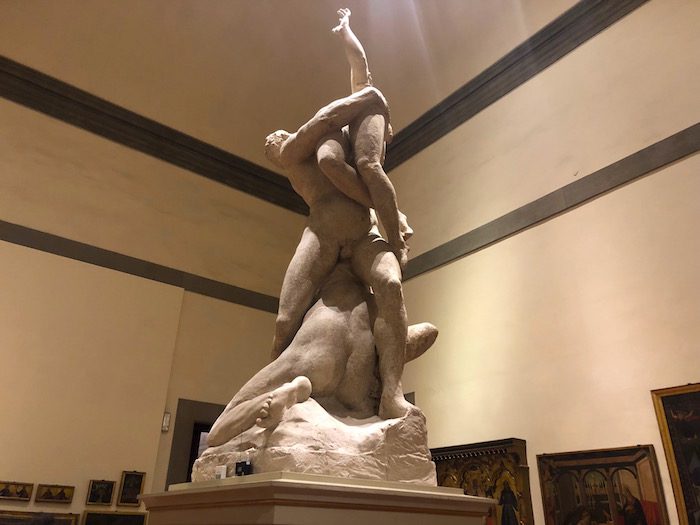 From every angle, the plaster cast model of the Rape of the Sabines by Giambologna is magnificent. Although the original marble structure is located in the Piazza della Signoria, this replica is a mirror copy and an impressive addition to the Accademia Gallery.

The sculpture depicts the rape of a Sabine woman by the Romans in 753 BC. Even though the Sabine’s army attempted to save many of the captured women, the Roman army fought off the incoming attacks and secured the women as their wives.

Drawing vision from Michelangelo’s craftsmanship, Giambologna intertwines figures within his composition to demonstrate the complexity of his story. This method of sculpting multiple figures from one piece of marble is unparalleled and defines Giambologna’s career as a Renaissance classic. 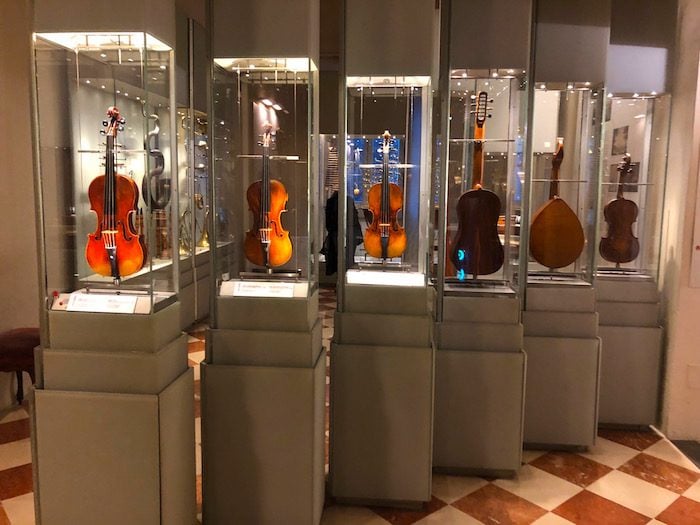 The Accademia has just about every type of Renaissance sculpture or painting, but it can even appeal to your music-loving self. As its own exhibition in the gallery, the Museum of Musical Instruments demonstrates the prominence of music for celebrations and 14th century Italian culture.

From harpsichords, wind instruments, pianos, violas, and so much more, this exhibit gives viewers a glimpse into the evolution of musical instruments and the work of musicians who commanded rooms with their rhythm and artistic sound.

A short flight up to the first floor of the Accademia will transform you into the aesthetic vibes of late 14th century. Almost as if it were purposefully hidden from tourists, this undisturbed area displays Florentine religion, fashion, architecture, and international gothic pieces by famous Florentine artists such as Lorenzo Monaco, Gherardo Starnina, and Cennino Cennini.

The area is segmented into multiple hallways depicting the important elements of the 14th century for those living in Florence. The illumination of gold in contrast to the red carpeted background of the works exudes elegance and class, which were achievements sought after by Florentines during the time.

The Galleria dell’Academia opens from 8:15 a.m. to 6:50 p.m. on Tuesday through Sunday and remains closed for business on Mondays. If you plan to buy a ticket at the door, you must enter the Accademia before the ticket office closes at 6:20 p.m.

Since it can take roughly two hours to get the most out of your museum experience, it is recommended to either book a guided walking tour or to buy tickets ahead of time. Skip the line tours will allow for an effortless entrance into the Accademia, maximizing your time to admire the masterpieces. Other options for purchasing tickets are available on the Accademia’s website. 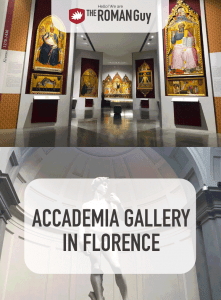 How to Climb St. Mark’s Bell Tower in Venice 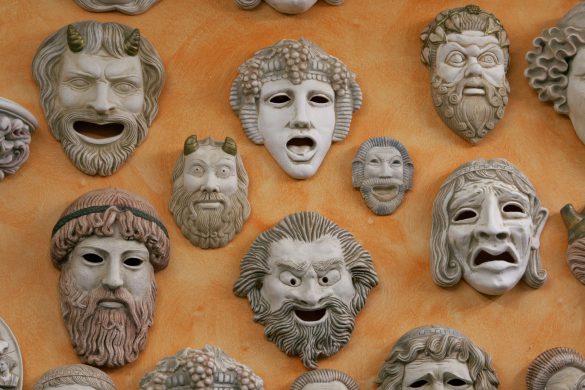 8 Local Things to do in Florence