Home > > Who Painted the Sistine Chapel?

Could you dedicate almost 10 years of your life to one project while living and sleeping in the same room that you are working in? With stifling heat in the summer and freezing cold in the winter?

500 years ago, the most famous artist of the Renaissance set out to create a masterpiece that is unrivaled even to our current time – The Sistine Chapel. So who painted the Sistine Chapel?

We are a local tour operator in Bella Roma and therefore feel it is our mission to ensure that everyone eats and drinks well. For some great views, enjoy our list of best rooftop bars by the Vatican. As for food, check out our Guide to Roman Cuisine: The best restaurants in Rome.

What is the Sistine Chapel?

Originally known as the Cappella Magna, its current name derives from the pope who restored it in 1477- Pope Sixtus IV. The Sistine Chapel is located inside the Vatican Museums and is the private chapel of the pope.

It’s also where all of the cardinals from around the world come together to elect a new pope during the conclave.

The Sistine Chapel is one of the most famous sites in the world due to the monumental fresco paintings that cover every inch of the chapel. During the time of Sixtus IV, the Sistine Chapel was decorated by some of the early famous Renaissance artists such as Botticelli, Perugino and Ghirlandaio.

These artists were the generation before the High Renaissance artists and also the teachers to both Michelangelo and Raphael respectively.

So, who painted the Sistine Chapel? While many Renaissance artists helped, Michelangelo is the main artist to take credit for this work of art.

Michelangelo was born to a middle-class family just outside of Arezzo in 1475. Tragedy struck him young as his mother died when he was only 6 years old.

In consequence, he was sent to live with stone-cutters in the Tuscan countryside. This set the stage for his future, epitomized in a famous quote through his biographer Vasari:

“If there is some good in me, it is because I was born in the subtle atmosphere of your country of Arezzo. Along with the milk of my nurse I received the knack of handling chisel and hammer, with which I make my figures.”

As a child he showed no interest in a formal education and preferred to sketch churches. As a result, at the age of 13, his father apprenticed him to a prominent artist at the time, Domenico Ghirlandaio.

Luck would have it that soon after, Lorenzo the Great of Florence asked Ghirlandaio for two of his best pupils- one of them was Michelangelo.

Throughout history, there could not have been a more exciting time to be an artist living in Florence. Florence was a bustling city full of merchants growing rich and therefore perfect patrons, together with the Catholic church to support this beautiful period of re-birth known as the Renaissance.

For two years living at the court of Lorenzo the Great, Michelangelo was able to not only learn the skills needed but also mingle with the greatest minds of society at the time.

Why was Michelangelo Chosen to Paint the Sistine Chapel?

As Michelangelo matured, his brilliance began to shine above all others. His travels took him around Italy and during these early years he sculpted not only the famous Pieta, but also the David.

In 1505, Michelangelo was back in Rome working on a monumental tomb for Pope Julius II. According to Condivi (a Michelangelo biographer), Bramante, the head architect for Julius II, was upset with Michelangelo for being commissioned the tomb.

In order to set up his downfall, he went to the Pope and told him that Michelangelo should be commissioned to paint the Sistine Chapel ceiling. Bramante’s plan was that Michelangelo would fail miserably and would be sent back to Florence in shame.

Ironically, Michelangelo was not happy about the commission and supposedly even tried to run away from Rome! The original plan was to paint the 12 apostles, but instead Michelangelo persuaded the Pope to paint the stories from Genesis, the first book in the bible.

Why is the Sistine Chapel a Masterpiece?

When Michelangelo set out to paint the ceiling of the Chapel, he had to paint in fresco. Fresco painting is when you apply a coating of plaster to a wall and before it dries completely, you paint on top of it. As the plaster dries, the colors are absorbed into the plaster, making it last forever.

The downside is that if you make a mistake, you need to break the plaster and start all over again. This is why painting in fresco is so difficult! And to top it off, this would be Michelangelos’ first real attempt at Fresco painting!

In the beginning he brought in some friends to help, but later let them go and did the entire ceiling by himself! It took him 4 years to conclude the painting and in essence had created an entire new style of painting.

His figures were strong, with huge muscles- even the women.

His style was copied by many artists, including Raphael in the papal apartments. However, none managed to capture it the way Michelangelo could. To quote Edvard Munch:

“One can easily tell that the creator of the paintings in the Sistine Chapel was above all a sculptor.”

After the completion of the Sistine Chapel ceiling, Michelangelo sealed his fate as one of the most famous Renaissance artists. He was a rare artist who enjoyed not only wealth during his lifetime, but also 2 biographies written by contemporaries.

He went on to complete many more masterpieces, including the monumental back wall of the Sistine chapel- The Last Judgement.

Astoundingly, Michelangelo lived until he was 88 years old, which was extremely rare in those times. Although he died in Rome, his body was sent back to Florence where he rests to this day in the Basilica di Santa Croce. 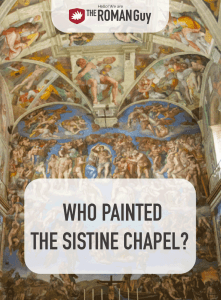