What is the Roman Forum? Your Guide to the Best Ruins in Rome

As you walk towards the Colosseum, you’ll likely take the Via dei Fori Imperiali or Avenue of Imperial Forums. On either side of this road, vast ruins represent the grandeur and power of Rome nearly 2,000 years ago. These ruins are what remains of Rome’s ancient center city – the Roman Forum. Often overlooked by the Colosseum, the Forum contains some of Rome’s most important history. So, take a stroll through these ruins and learn about what these buildings were used for.

We’re passionate about the city of Rome and we want you to be as well. That’s why we offer a variety of Rome tours and day trips. From Vatican tours to Roman Colosseum tours (complete with skip the line privileges), experience The Eternal City’s vibrant history and culture with The Roman Guy.

In the time of Emperor Augustus, the city of Rome bustled with around 500,000 people (some estimates even say up two million). The center of the ancient metropolis was the Forum. Here is where you would find everything from the markets to courts, it was the center of daily life. Though today it lies in ruins, the Forum provides vital clues about the ancient Roman Empire.

As you enter the Roman Forum, you will be facing the grand Arch of Titus. Smaller than the Arch of Constantine, the Arch of Titus is an impressive honorific arch in its own right. Constructed in 82 A.D., Emperor Domitian erected the arch after the death of his brother Titus. The 50-foot arch commemorates Titus’ military victories including the Siege of Jerusalem in 70 A.D. While it isn’t confirmed, Roman architecture experts believe that the same architect designed the Colosseum.

As you make your way down the ancient Via Sacra to the Arch of Titus, you will encounter the remnants of the Temple of Vesta. Originally surrounded by 20 Corinthian columns, the ruins are a good indication of what the temple may have once looked like. Today, what remains of the Temple was reconstructed by Mussolini in the 1930’s after the Forum was excavated.

The Julian Senate House or Curia Julia is one of the most intact buildings in the Roman Forum. Unlike most buildings in the Forum, the Curia Julia is visible in its restored state. This is due to its conversion into a church centuries later. Still, this large building was the home of the Roman Senate throughout the time of the Empire. The Curia was under construction when Julius Caesar was assassinated in 44 BC at the Theatre of Pompey (near Largo di Argentina in today’s Rome).

Temple of Antoninus and Faustina Known today as the Church of San Lorenzo in Miranda, this functioning cathedral is adapted from the ancient Temple of Antoninus and Faustina. Though much of the structure is updated and rebuilt, the original portico encased by marble columns still stands. Like many churches around Rome, this basilica is remodeled and built upon from its original structure. Just like much of Rome, the various levels of the church reflect modern and ancient Rome. Another great example of this, the Basilica of San Clemente is located on the other side of the Colosseum (only a 10-minute walk from the Forum).

The Roman Forum is an incredible opportunity to see the city as it was millennia ago. The ancient temples, government buildings and the large stadium next door give us a clear picture of ancient Roman daily life. Though many overlook this area as the ruins next to the Colosseum, seeing these ruins is one of the things to do in Rome that you cannot miss out on. If you’d like to get the most out of the Forum, check out our Colosseum and Roman Forum Tours. With a knowledgeable guide, access to the Forum and skip the line tickets, our tours bring the history of Ancient Rome to life. 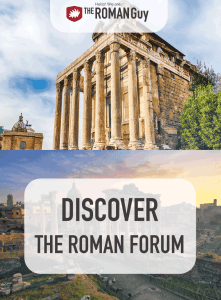 Vatican Christmas Mass: How to Get Tickets

Is there Uber in Italy?