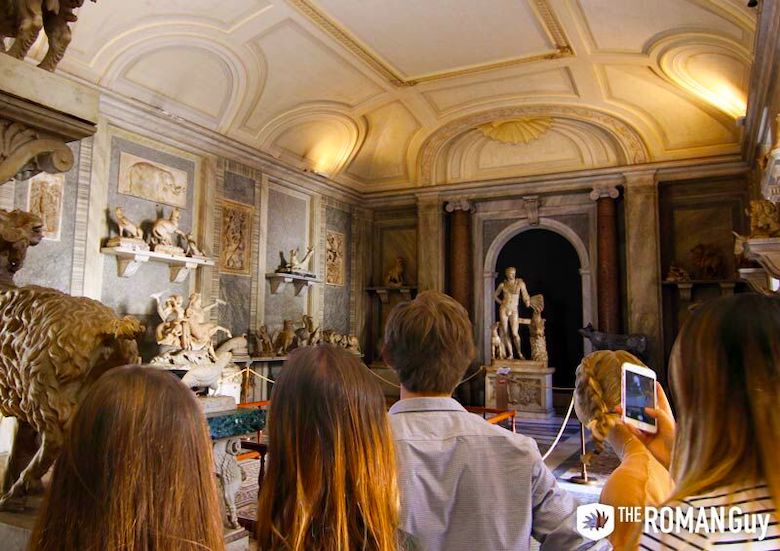 The Vatican is home to thousands of works. The Museums are divided into 54 different galleries, some devoted to a specific artist, period of time, style of artwork, you name it.

Among all of its beautiful spaces, the Vatican displays its biggest exposition area: the Pio Clementino Museum. Let’s discover its history a little bit better and see what this space has to offer!

Eating, Drinking and Taking a Tour

When I am on vacation I enjoy those 3 things above in that order. That’s why I want to make sure that you do too. Enjoy the best eateries by the Vatican after your visit and also the best rooftop bars by the Vatican.

Now that you have settled your hunger and your thirst, click on the link to see all of our amazing Vatican tours  that visit the Raphael Rooms.

This area was created for the first time in 1771 by Pope Clement XIV, who acquired different collections from some Italian families and was in need of a bigger space to display them all. After a former display of all the works acquired though, Pope Clement’s successor, Pope Pio VI, decided to modify and improve the space by adding some monumental entrances to the complex.

The total space today is made up of twelve different rooms where priceless artworks are showcased. Also, the name of the museum “Pio Clementino” comes from the two popes that worked the most on its realization.

As mentioned, this museum is home to some of the best art pieces from different ages, such as the Classical and Hellenistic periods. The first room to visit is the Apoxyomenos room.

The main character portrays a young athlete while bathing. Of course, bathing was a little different in ancient Rome than it is now. The Apoxyomenos Statue is actually scrubbing himself with olive oil and scraping it off with a strigil.

This statue was initially located in the Agrippa thermal bath, and along the ages, Roman people lost track of it.

It was found in a Roman neighborhood in the 19th century and finally showcased in the Vatican Museums in 1932, where it has remained ever since. 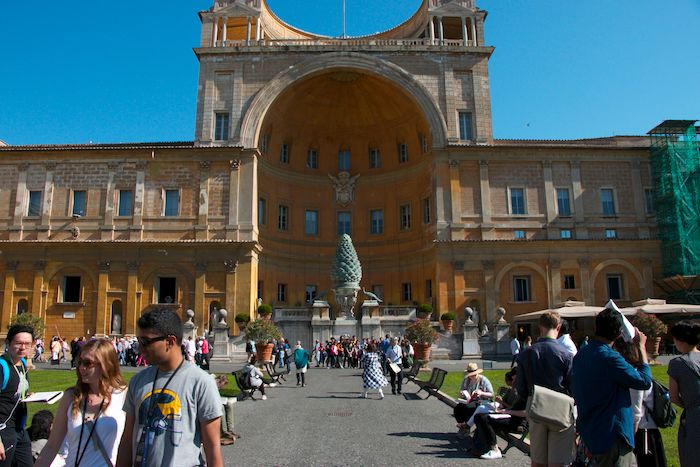 Another pearl in the Pio Clementino Museum is represented by the Apollo del Belvedere statue, created in the Hellenistic period when the Roman empire had completely expanded over Greece. Many of the works of art in this courtyard were actually found by an earlier Pope Julius II.

After a few centuries, this sculpture was found by the Roman seaside during the 15th century and then lost again until the 18th century, where it was found in the Roman countryside.

The Apollo del Belvedere is still considered the best example of proportion and harmony for the human figure and, for some, it represents aesthetic perfection. The Apollo Belvedere was studied by Michelangelo, and the face of the statue is the exact same face used in Michelangelo’s Jesus in the Last Judgment in the Sistine Chapel! 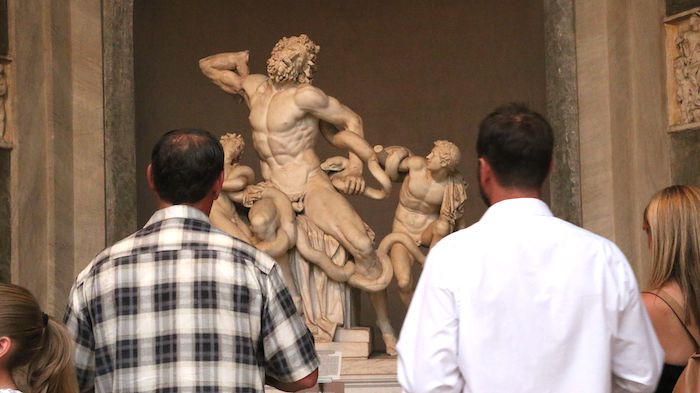 According to the Latin intellectual Plinius, Laocoön and His Sons was initially located in the Emperor Titus’s mansion. During the 16th century, the statue was found by Pope Julius II, who was passionate about classic art and willing to find this gem.

According to some historical source, the Pope entrusted no less than Michelangelo to verify the authenticity of this sculpture.

This amazing statue portrays a scene from the classical Latin novel, the Aeneid, where the priest Laocoonte and his children are attacked by snakes that kill them all. This work of art is considered one of the biggest pieces displayed in the Vatican Museums.

The Sculptures Gallery: the Mattei Amazon

Another classical art work showcased in the Pio Clementino Museum is the Mattei Amazon, a work inspired by the Greek artist Phidias. Originally this statue was owned by the Mattei family and later acquired by the Vatican Museums in 1771, when Pope Pius XIV decided to buy their entire collection.

Unfortunately, some pieces of the entire sculpture got lost throughout the centuries but, according to classical sources, this work should have portrayed an Amazon while climbing her horse while, probably, holding a spear.

The Masks Room: the Aphrodite of Cnidus

According to history, the original Aphrodite statue was created by the Greek sculptor Praxiteles and what we can still admire today in the Pio Clementino Museum is the best copy ever found. This sculpture represents the goddess Aphrodite while she’s about to take a bath.

Aside from the classical beauty and harmony that the statue can display, its importance has to be found in the fact that for the first time in history a woman was portrayed naked, completely changing the art history world. For centuries, artists studied and looked at this statue as its “S” shape is still considered the best-portrayed body of all time.

The Muses Room: the Belvedere Torso 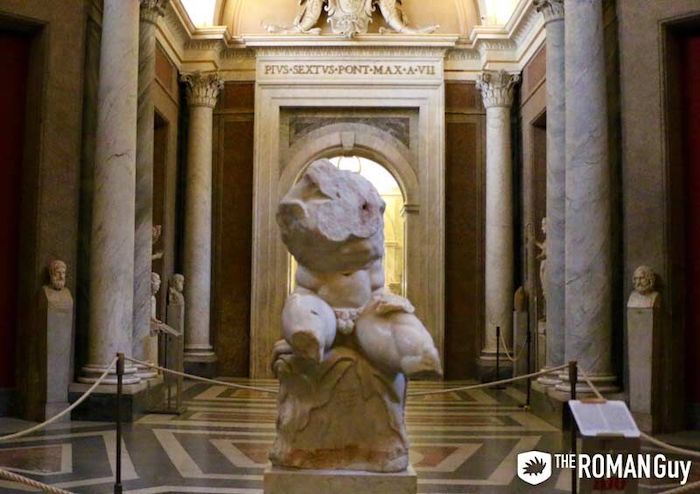 The Belvedere torso is a marble sculpture created by the Greek artist Apollonius. Unfortunately, this statue is almost completely mutilated.

It doesn’t have the head or arms anymore but it is still considered one of the best examples of classical beauty thanks to its torso.

According to legend, Pope Julius II entrusted Michelangelo with the work to reproduce a head or the arms for this statue but the artist, too amazed by its beauty, refused to complete the work and left the statue untouched.

Supposedly, Michelangelo loved this statue so much that when he was going blind later in life, he would run his hands along the statue to feel its curves.

The Round Room: Hercules from Pompey’s Theatre 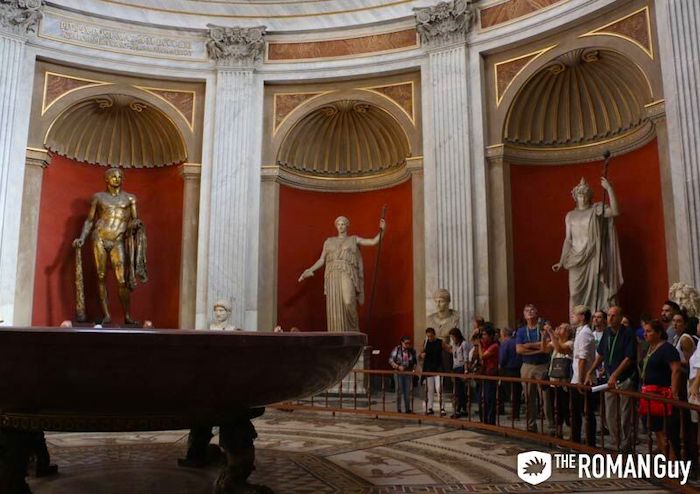 Unlike the other sculptures showcased at the Pio Clementino Museum, this one is made entirely in bronze. It was only discovered during the 19th century in a Roman park and brought to the Vatican Museums immediately after.

According to tradition, this statue was buried in that exact location thanks to lightning and it never changed its location. By looking at it, it’s immediately possible to recognize Hercules thanks to some characteristic elements such as his cudgel and lion skin. 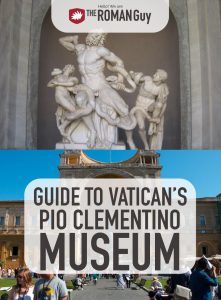 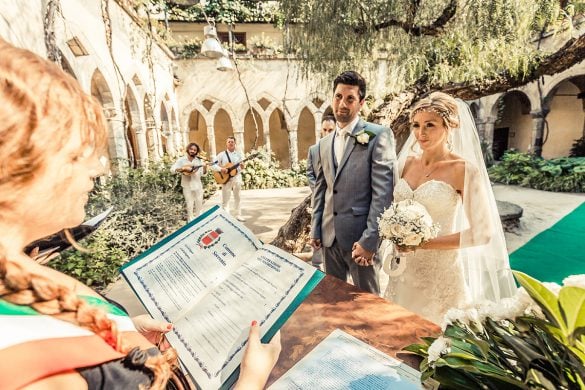 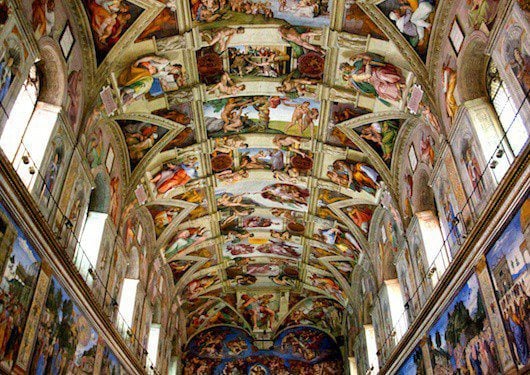