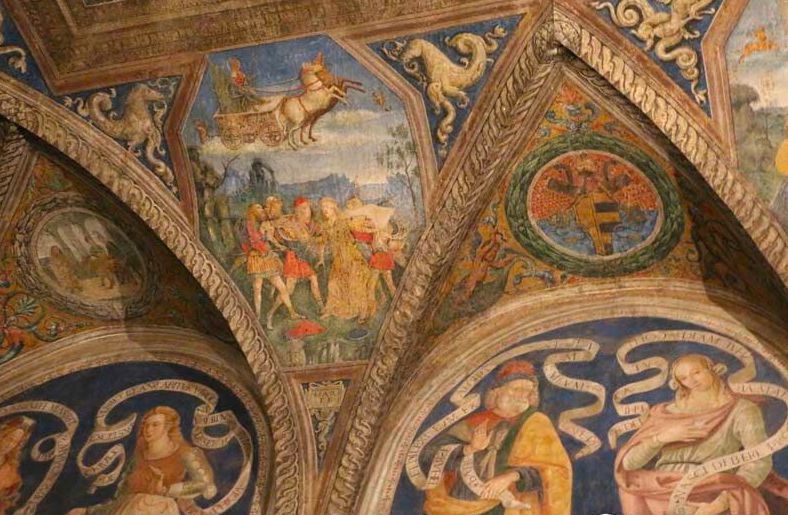 You may often hear the name “Borgia” while visiting the Vatican. For a long time, this powerful Roman dynasty managed to be a very powerful influence on the Vatican and a name remembered by future generations. The Borgia Apartments are now included in the Vatican Museums, which is a highlight of many of our Vatican tours. In this guide, you can find some background information on the Borgia Apartments and how to visit these exquisite rooms.

Who Painted the Borgia Apartments?

The Vatican Palace was built under the pontificate of Pope Niccolò V. After him, a member of the Borgia family, Rodrigo Borgia, also known as Pope Alessandro VI, decided to decorate these rooms and he did it in a monumental way. The pope decided to entrust the already well-known painter Pinturicchio with his decorative project.

On one hand, the artist had to face a challenge but he also wanted to mark these spaces with an impressive work never seen before. The decorative works got started in 1492 and Pinturicchio, along with some collaborators, completed the rooms in 1494. Despite the beauty of these rooms, they remained closed to the public for a very long time. Many artists were never able to admire this beauty and reproduce it somewhere else.

Room of the Sibyls

The last room completed by Pinturicchio and his collaborators is the Room of the Sibyls. While observing the frescoes, you might find the year the room was completed (1494) painted on the ceiling. This space is decorated with several different motifs that express Pinturicchio’s imagination and personality. You might encounter mythological characters all over the room and also some amazing reproductions of plants and fruits.

What might surprise you is the fact that the painter chose to include several astrological symbols, specifically the Taurus sign painted several times all over the room. Of course, there’s a reason behind it: the Borgia’s crest in fact used to show a bull in the middle and Pinturicchio decided to pay homage to the family this way.

For this room, Pinturicchio decided to follow the usual project, focusing on the ceiling. However, for this area, the painter opted for a more classical work and reproduced several apostles and saints. Pinturicchio also decorated the room by inserting several fine geometrical figures, not easy to reproduce without some deep art studies.

The Catholic characters portrayed in this space have a very specific role: to express the strong union between the Old Testament and New Testament. According to some art critics, the style adopted by Pinturicchio for this specific space can be considered as a mix between the famous Tuscan style and the Umbrian one.

Room of the Liberal Arts

According to some ancient sources, this room used to be the Pope’s personal library and the former Vatican court. In this space, you might find Pinturicchio’s signature, even if some critics claim that the painter worked only on the preparatory drawings for this space.

On the ceiling, you might observe the personification of all the Liberal Arts such as geometry, rhetoric, figurative art and literature. All the characters embodying each art are portrayed while sitting on a throne to emphasize the importance and necessity of all of them. For example, Cicero was chosen to express the importance of rhetoric and Euclid for geometry. Some experts are still discussing today the character portrayed to represent the figurative art. The most credited theory assumes that the man sitting on the throne could be the painter Bramante.

Room of the Saints

The Room of the Saints is probably the best known among all the others. This space, in particular, is a clear homage to the reigning Pope, and, specifically, to the divine justice that only this human being can profess. To display this theme, Pinturicchio chose some Egyptian gods, Isis and Osiris, from the story written by the Latin poet Ovid. All of the paintings should express the constant fight between the evil, portrayed as the night itself, and the good, or daylight.

Also, a specific historical character is displayed in these frescos: Alexander the Great. Of course, Pinturicchio meant to associate Pope Alessandro VI with Alexander the Great. What you might find in this room while observing the frescos are some common references to the Borgia’s crest, such as the bull.

The Hall of the Mysteries of the Faith

This room was probably used by the pope to host private functions or visits. The name, the Room of Mysteries, is due to the Virgin Mary’s seven Mysteries, a series of some Catholic stories loved by Pope Alessandro VI. The peculiarity of this space is the perfect coincidence between the fresco paintings on the ceiling and the geometrical figures used for the floor. In every corner of the room, the artist decided to portray one of the seven Mysteries.

Of course, you should begin your visit by observing the first one: the Annunciation and then proceeding with the Shepherds Adoration until you arrive at the Resurrection and Virgin Mary’s final Assumption. Also, Pinturicchio decided to portray the Biblical Prophets in the corners of the room and so you might find, for example, David, Isaiah and Solomon.

The Room of Pontiffs

According to some sources, this room, the biggest of all of them, was used to host some official ceremony or public event. Unfortunately, all we can see today is a series of paintings produced in a second time, during the 16th century, after the tragic loss of Pinturicchio’s series of frescoes for this space. After Alessandro VI, many popes decided to close these spaces and never restore them. Sadly, this specific room was particularly devastated and was restored at a later date by Pope Leone X.

While the information we love to provide is free, we also sell incredible Vatican tours at pretty reasonable prices. Like what you’re reading? Check out our best Vatican tours and see which one is right for your Rome itinerary. 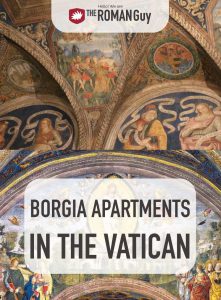 How to See St. Peter’s Tomb in Vatican City