Home > > Ultimate Guide to The Gallery of Tapestries in the Vatican: Look no further!

Among all the amazing art that the Vatican Museums have to offer, the Vatican Gallery of Tapestries is surely one of the most astonishing. Located in the very heart of the Vatican Museums, this gallery displays an enormous amount of tapestries, produced by the brilliant artist, Raffaello Sanzio, and realized by Belgian tapestry makers.

To tour or not to tour?

Supposedly if you stand in front of each art piece for one minute in the Vatican Museums, it would take you 12 years to see everything. While it is definitely possible to visit the museums on your own, I highly recommend a tour guide to get you in and out quickly before you go into overload with our Best Vatican City Tours In all of our Vatican tours, you will witness the Gallery of Tapestries up close!

Many people don’t know that the Vatican City is actually surrounded by the city of Rome. This is why if you are interested in some tours, then check out our Rome Tours as well!

Back in the day, there wasn’t central heating so people had to be resourceful. One way to keep heat in a room, was to put a carpet on the wall. That served as a kind of insulation and they also absorb heat so rooms stay warmer longer.

This is why today, when you enter the Vatican Museums, it is the only room with air conditioning!

The History of the Gallery of Tapestries

It’s due to Pope Leo X that today we can admire the beautiful tapestries on the walls of the Sistine Chapel. The Pope, in fact, wanted at any cost to be part of the chapel decoration and decided to entrust an artist, Raffaello Sanzio, with the drawings for the tapestries, in 1514.

As soon as Raffaello sent his drawings to the Pope, those were sent to Brussels to be transformed into tapestries. At that time, Brussels could boast the best artisans in Europe and Leo X opted for the very best for the walls of the Sistine Chapel.

According to Vatican sources, the tapestries were shown to the public for the first time on December 26, 1519.

Raffaello Sanzio’s work on the tapestries

As mentioned, Raffaello Sanzio was the artist in charge of the drawings to send to Brussels for the final preparation. Unfortunately, as even the historian and architect Giorgio Vasari claims, this artist met several initial difficulties while preparing his project.

First of all, Raffaello had to proceed from the bottom to the top to draw the scene when he was used to drawing everything starting from the top. Secondly, the painter inevitably had to compare his work on the tapestries with the majestic one produced by Michelangelo for the Sistine Chapel.

Raffaello managed to use Michelangelo’s work as a source of inspiration and completed his work two years later, in 1516, as the Vatican payment registers confirm.

What do the Vatican tapestries represent? 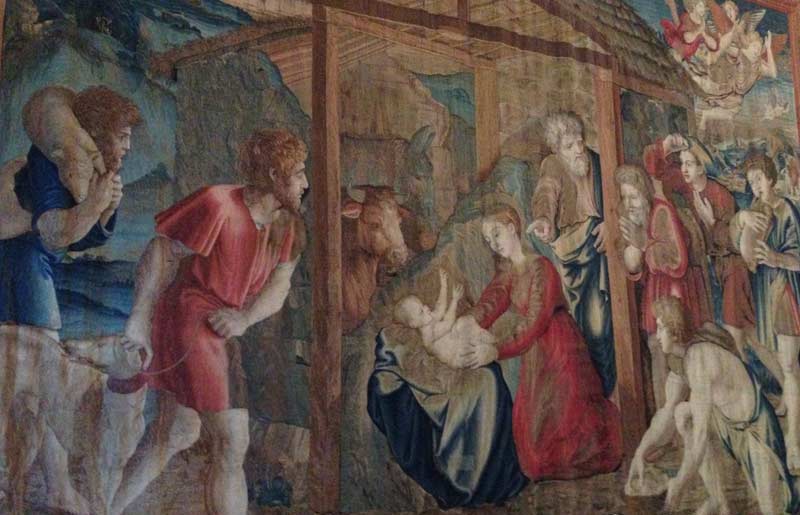 The series of ten tapestries, all produced by Raffaello’s brilliant mind, display two different Catholic stories. Raffaello decided to portray Saint Peter and Paul, considered by many as the Vatican co-founders.

This choice was practically a homage to Pope Leo X to publicly thank him for his contribution in the decoration of the Sistine Chapel.

The painter also decided to portray the Biblical stories of Moses. This decision can be connected with Michelangelo’s stories painted for the Sistine Chapel. Raffaello was deeply inspired by this major work and decided to pay tribute to this artist in this way.

Where are Raffaello’s drawings of the tapestries?

According to historical sources, Raffaello sent his drawings to Brussel’s artisans as soon as he completed them. The Belgian artists, in order to complete the tapestries, had to cut the drawings in several pieces. Those pieces were then largely used by the same man to produce several copies, as many artisans used to do at the time.

Apparently, the man even shared these drawings with other colleagues. All this sharing, unfortunately, meant that we lost track of the original pieces from Raffaello. Currently, several worldwide museums claim to be in possession of some Raffaello’s preparatory drawings, even though this information can’t be easily confirmed.

Raffaello had to face the notoriety and success of Michelangelo’s work on the Sistine Chapel. In order to obtain the perfect result, the artist used some of the main techniques and ideas coming from every other century for his drawings.

That’s why the background of the tapestries may look similar to typical Leonardo da Vinci works.

Also, he chose to portray every character with similar techniques to the ones used by Michelangelo. Despite a superficial similarity between the two, it’s evident that the bodies look more balanced and less tensed than those portrayed by Michelangelo.

Having the chance to see artists such as Michelangelo and Raffaello at the same time seems to be unique! If you are ready to live this incredible art experience and you want to see some hidden Roman treasure, join Vatican tours from the Romany Guy! 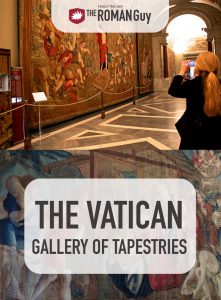