Guide to the Gallery of the Candelabra in the Vatican 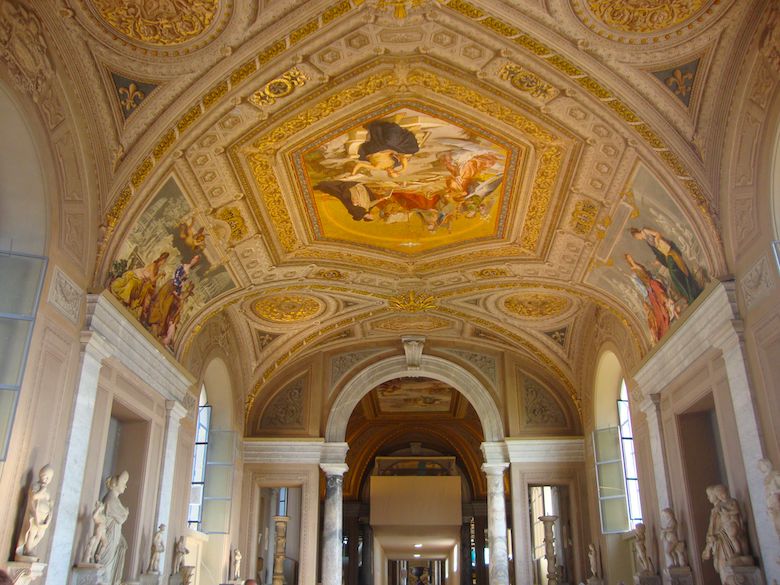 In the late 19th century, the Vatican was an island surrounded by an enemy country: Italy. Pope Leo XIII was practically a prisoner inside the Vatican walls and to cheer himself up, he created the Candelabra Gallery. In this guide, learn the history of the Gallery of the Candelabra in the Vatican and the most important works inside.

History of the Gallery of the Candelabra 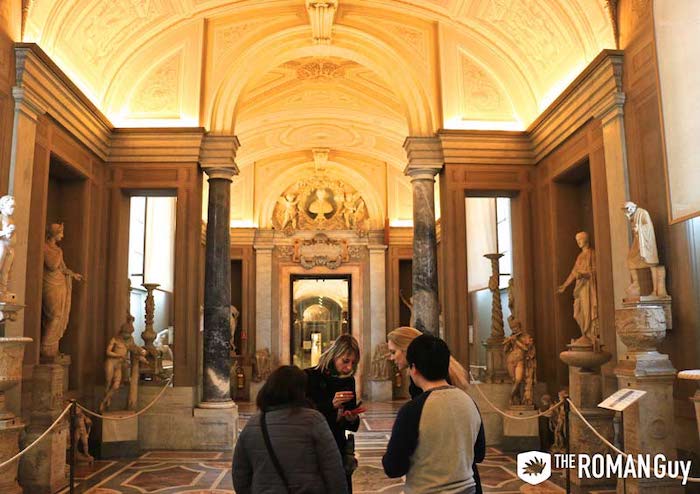 During the second half of the 18th century, there was a need for more space in the Vatican. The pontifical collections were growing exponentially as further excavations took place across Rome and Lazio. The Gallery of the Candelabra forms part of the Pio Clementino Museum, an addition to the Cortile delle Statue where most of the classical sculptures in the pope’s collections are housed.

The influence of Enlightenment thinking is what led the pope to turn the building into a museum in the modern sense, allowing the public to enter and experience the treasures that had been found across the country, and promoting the study and understanding of the collections.

Where Does This Gallery Get Its Name?

The Gallery of the Candelabra gets its name from the majestic candelabras that go with the colored marble columns. Originally an open-air loggia built in 1761, the long hallway was walled at the end of the 18th century and is now divided into six sections, full of notable statues, relics and works of art.

The Gallery Through Time

Originally designed under Pope Pius VI between 1785 and 1788, the gallery was completely renovated by Pope Leo XIII, and this is largely the decoration you see today. This restructuring was carried out by Annibale Angelini, who appointed Domenico Torti and Ludwig Seitz for the paintings, and Giuseppe Rinaldi and Luigi Medici for the marble inlays. The works were arranged like furnishings, and you enter through the original monumental bronze gates, which are still in place today.

Over time, the heat of the Roman summer caused the colors in the frescoes to almost fade away entirely. This is why the Gallery underwent its most recent restoration in 2016.

Artwork Inside of the Gallery of the Candelabra 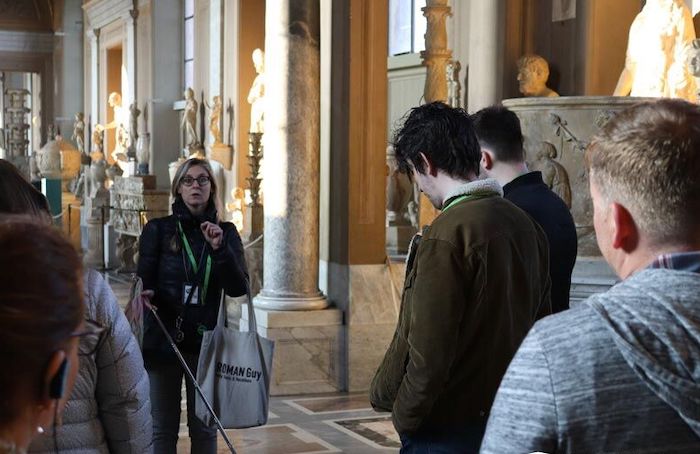 The Gallery is decorated with impressive chiaroscuro and grisaille frescoes across the walls and vaults. Chiaroscuro is a traditional technique using bold contrasts, while grisaille is a painting technique using grey tones as a base and is often an under-painting for an oil painting with other colors. These techniques are what makes the frescoes in the  Gallery appear three-dimensional.

Pope Leo XIII commissioned the artist Ludwig Seitz and Domenico Torti for the ceiling, which were done between 1883 and 1887, and also for the walls, although various other artists also contributed to these.

One of the most notable works is the fresco “The Triumph of Truth,” painted by Torti, which shows history dictating the remarkable events of time. It was a German artist, however, Seitz, who painted the grandest and most important series across the ceiling, which took inspiration from Pope Leo XIII’s desire that St. Thomas Aquinas and his philosophy should have priority in Catholic theology. In the middle of the ceiling, you can see St. Thomas kneeling and offering his works to the Roman Catholic Church.

The spectacular inlaid marble floor was put together by Luigi Medici, his son Paolo Medici and Giuseppe Rinaldi, using marble found during excavations of the Tiber River in Testaccio.

The coat of arms of Pope Leo XIII in the middle of the gallery is particularly impressive because it was made with precious lapis lazuli. At the time, it would have cost as much as gold because the only place it was found was in mines in a remote region of Afghanistan.

The hall contains works found throughout Rome and Italy, bringing relics of the vast Roman empire into the modern day.

Gigantic Toe of a Right Foot

In the first section, after entering through the monumental bronze gates, one of the most interesting pieces is the “Gigantic Toe of a Right Foot,” which was found in early 1880 near the Colosseum. This is just one small part of a statue that originally stood at around 13 meters tall, and was perhaps one of the cult statues of the nearby Temple of Venus and Rome.

In the second section, there is a “Meridian,” which was found in 1858 In the ancient coastal town of Ostia. The dial is divided into twelve vertical segments in turn divided into three horizontal bands: the first corresponds to the hours, the second to the winter solstice, equinox and summer solstice.

Statues in the Gallery of the Candelabra 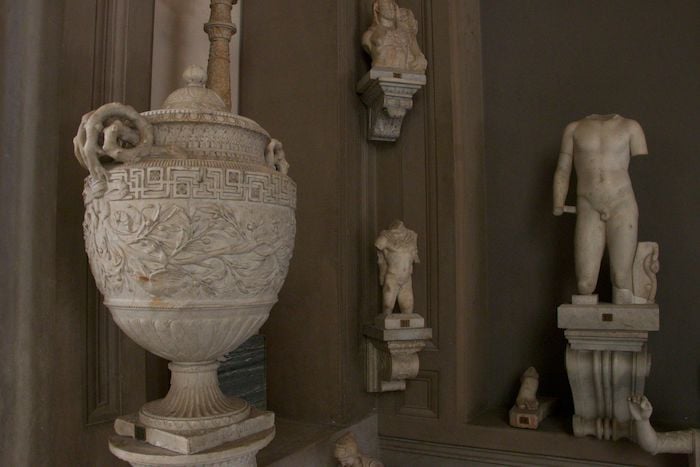 The third section contains an extraordinary mosaic with still-life from the second century from Tor Marancia on the Via Ardeatina, which is actually where most of the works in this section were found. The statues “Hypnos God of Sleep” and “Thanatos Genius of Death” are from the mid-second century, inspired by the work of Praxiteles, found in 1774 in the Villa of Cassius at Tivoli.

The impressive “Statue of an Old Fisherman” lies in the fourth section, another find from the second century. It was found in Anzio during excavations in the Pamphilj property. The Pamphilis were a famous Roman aristocratic family whose house today contains one of the most valuable private collections of paintings in the world.

The fifth section contains a Circular Altar from as far back as the first or second century BC from Tor Colombaro on Appian Way. It depicts a scene of sacrifice in the presence of Mercury.

One of the most famed exhibits in the Gallery of the Candelabra is found in the sixth and final section of the Gallery: the Persian Warrior, a Roman copy of a statue set up as a votive offering by Attalos II of Pergamon around 160-150 B.C. on the Acropolis in Athens. This statue was found during the construction of Palazzo Medici, now Palazzo Madama.

While we love to provide you with free information about the Vatican, we’d love to show you around the Vatican Museums in person even more. Explore our best Vatican tours and pick which experience works best in your itinerary. 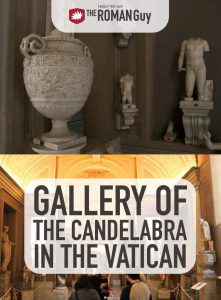 I came to Italy to study, and fell in love with the food, culture and people - three years later, I'm still here. I now work in digital media full-time, but when I'm not behind a computer screen you'll find me sipping vino at one of my favourite Roman bars!

What to See in the Uffizi Gallery: 5 Main Artworks

When Was Vatican City Built: From a Licensed Vatican Tour Guide

Ciao Solana! So glad to hear that you enjoyed reading our blog! We’d love to welcome you on a Vatican tour sometime soon 🙂