The Cabinet of the Masks is one of the many hidden treasures you can find at the Vatican Museum. Though many visit the Sistine Chapel and the Raphael Rooms on their trip to the enclave city, few visitors take the time to check out this amazing room. This makes it one of the best hidden gems that you can include on your trip to the Vatican.

The story of the cabinet of the masks begins with architect Allesandro Dori, a Roman architect also known for his work on the facade of the Biblioteca Marucelliana in Tuscany. He was one of the finest architects of the late eighteenth century, and jumped at the opportunity to work for the Holy See.

In 1771, he was given this opportunity and chose to center his work on one of the halls weaving through the Palazzeto Innocent VIII. The hall was, in fact, originally intended for museum use, a role it continues to play to this day. Though some of Dori’s work still remains, much of the hall was redone not ten years later by Michelangelo Simonetti, whose neo-classical style can be seen throughout the Vatican, including the main rotonda of the Vatican Museums the Halls of Muses and Animals, as well as the Candelabra Gallery. 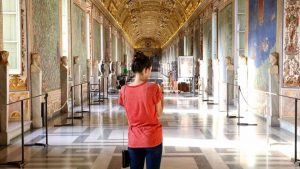 Simonetti’s revisions can largely be seen today. He commissioned the artists Cristoforo Unterperger and Domenico De Angelis to paint the elegantly detailed paintings and stuccoed decorations that line the walls of the Hall of Masks. In its center, Simonetti installed a tiled mosaic taken straight out of the villa of Emperor Hadrian in Tripoli. Of the depictions, several figures wearing masks can be seen, which is where the hall derives its name: The Cabinet of Masks.

Along with tiled mosaic, paintings and stucco that decorate this beautiful room, the Cabinet of Masks also features several works of sculpture. These are almost exclusively female designs, and are inspired by ancient Greek mythology. Aphrodite serves as the main subject, with several renditions of the Goddess of Beauty looking over the room. Nymphs and graces can also be found among the statuary.

Some of the highlights of the paintings include the  “Marriage of Bacchus and Ariadne”, which depicts the mythological story of Bacchus (also known as Dionysus), the God of wine-making, harvest and fertility, marrying the human Ariadne, who figures in the story of Theseus. According to legend, Theseus abandoned Ariadne on a deserted island on his long journey that ended with his founding of Athens.

According to the story, Bacchus took pity on the abandoned Ariadne and married her. Surrounding this painting are Diana and Endymion, Venus and Adonis, Paris denying Minerva the apple and Paris offering the apple to Venus. All three of these paintings were made by Domenico De Angelis, one of the finest of his day. 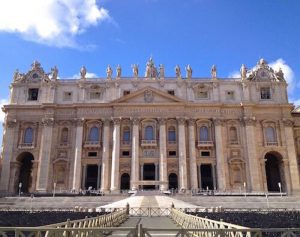 One of the odder features of the room is the “Dung Chair”, made of a dark rose marble. A toilet fit for a pope, this chair saw use for several centuries of holy pontiffs. The chair was popularly associated with the likely fictional female Pope Joan who supposedly reigned in the years 853-855 A.D. Legend has it that, to avoid a repeat of the election of a woman, each new pope was subjected to a thorough examination while sitting on this chair to make sure it was not a woman in disguise.

How can I visit the room?

We definitely recommend our Skip the Line Vatican Tour with Sistine Chapel & St. Peter’s Basilica, if you really want to check out the Cabinet. Not only will you gain privileged access to this off-limits space, but you’ll also skip the lines to the rest of the Vatican’s top sights. It’s a really great deal, and one that’s hard to beat!

Guide to Direct Flights to Rome From the U.S.

How to Climb St. Peter’s Dome