Which Roman Emperor Fought in the Colosseum? 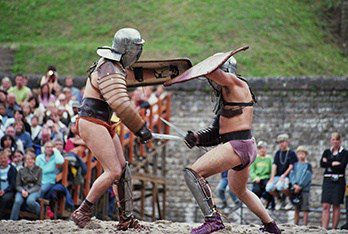 Famously played by Joaquin Phoenix in the film “Gladiator” (2000), Emperor Commodus orchestrated one of the most violently cruel reigns in Roman History. Son a great Roman general, Commodus spent much of his life trying to live up to the image of his father. The only emperor to fight as a gladiator in the Colosseum, Commodus lived a debaucherous life & ruled with an iron fist.

If you’re looking to explore the Colosseum (even at night), we’ve got some of the most popular tours in Rome.

The story of Commodus begins with his father, the Emperor General Marcus Aurelius. Considered one of the Five Good Emperors, he oversaw a period of military domination and domestic peace that made him popular among the Roman people. He was considered a Philosopher King, famous for his stoic wisdom and writings.

So in 161 AD, when Marcus Aurelius sired two sons, Commodus and Titus, they had big shoes to fill. This was the first time in almost one hundred years that an emperor had a biological son legitimate for the throne. 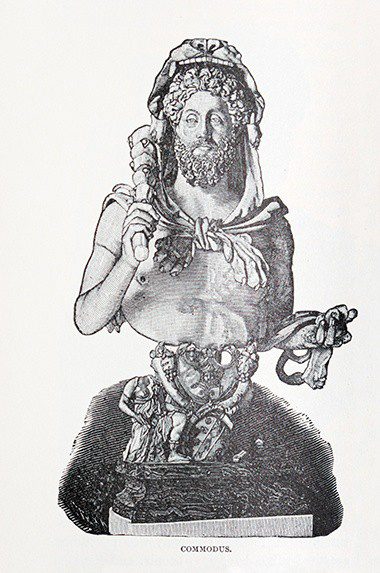 Even as a young child, Commodus displayed a penchant for cruelty that would carry into his rule later on. One story goes that the young prince once cast a servant into a furnace for drawing a bath that was too cold. It displayed the love of violence that would compel him to compete as a gladiator in the Colosseum when he went on to rule Rome.

When his younger brother died, it was clear that young Commodus would be the next to rule the Empire. Despite violence abroad, Rome flourished under the reign of his father. The Roman people were happy to have the son of an enlightened leader as their new Emperor. Little did they know what was in store.

In 180 AD, Marcus Aurelius died, and at eighteen years of age Commodus was made Emperor of Rome. Despite the hopes of the citizenry, it soon became clear that the young king was little like his father.

Commodus loathed the daily work of administration, and delegated nearly all of his responsibilities to his inferiors. Corruption abounded, as many took advantage of powerful positions with no oversight.

Rather than tending to his official duties, Commodus opted to spend his time satisfying his violent and debaucherous whims. He executed people indiscriminately, personally making human sacrifices, faking an attempt on his own life to justify further executions, and even ordered that Rome be burned to the ground. Thankfully this order was ignored.

He had a penchant for spectacle, and loved the crowd. Styling himself after the Greek hero Hercules, he fought as a gladiator in the Colosseum, though it was never a fair fight. It was forbidden for the Emperor to come to any real harm in the Colosseum, so he invariably won every bout.

In all, Commodus participated in 735 contests as a gladiator, according to the Historia Augusta. With official matters left unattended, and an Emperor dishonoring his title, the Senate conspired to have the Emperor assassinated. They gave the task to the Emperor’s training partner, who carried out the gruesome deed.

Declared an enemy to the people of Rome, Commodus’ body was dragged through the city streets and cast into the Tiber river. His name was largely erased from Roman buildings, except for a public bath built in his honor.

Today, Commodus is known as the Emperor who fought in the Colosseum, but his legacy is much larger than that. His rule ended years of stability and relative peace in the Empire, and it was almost entirely his own doing. What followed his death was civil war and partisan in-fighting, bringing the Era of the Five Good Emperors to an end.

On Amalfi or Pompeii visit? Here are the must-see sights