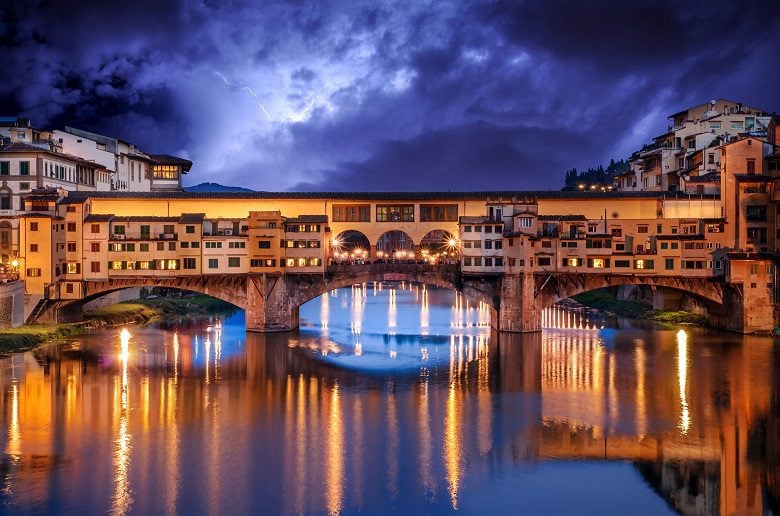 Ponte Vecchio (Italian for Old Bridge) is the oldest standing bridge in Florence. Believed to have been built during Ancient Roman times, the earliest known identification of the Ponte Vecchio appears in a document written during the 10th Century BC. A historic Florence commercial beacon, this medieval arch bridge stands strong as a survivor, telling the story of the Renaissance Capitol.

While the information provided in this post is free, we also sell tours at very reasonable prices. We lead Florence tours of all kinds, from Tuscany countryside wine tasting tours to Accademia and Uffizi Gallery tours to a Florence food tour complete with Florentine steak. Considering making your experience in Florence a memorable one with The Roman Guy.

Situated between the Ponte Santa Trinita and the Ponte alle Grazie on the river Arno, the Ponte Vecchio is believed to have first been built by the Romans. The bridge succumbed to powerful floods in 1117 and 1333 before being permanently rebuilt in 1345. Its current design was conceived by the Italian architect and painter Taddeo Gaddi.

The buildings clinging onto the bridge are shops that have been on Ponte Vecchio since the 13th century. Initially, there were all types of shops, including butchers and fishmongers who could clean and prepare their meats while letting the waste fall directly into the river.

The Origin of Bankruptcy

Local merchants capitalized on the frequency of foot traffic crossing the bridge by setting tables up to sell their goods. It is here that the concept of bankruptcy is said to have originated. Merchants unable to pay their debts had their tables broken to stop them from selling any more goods. As a result, the merchant was declared banca rotta – meaning broken bank.

The Crown Jewels of Florence

Vasari Corridor, which runs above the whole length of the bridge, was constructed when Cosimo I de’ Medici, Grand Duke of Tuscany, moved into the Pitti Palace along the Arno River’s south bank. In order to mitigate the risk of assassination, Cosimo I had the architect Vasari design a corridor that would connect his home with his office in the Piazza della Signoria. The corridor spans almost one kilometer and boasts panoramic views of the Arno River.

While butchers originally monopolized the Ponte Vecchio beginning in 1442, a 1595 decree designed to elevate the prestige of the Vasari Corridor was enforced, prohibiting butchers from selling meats on the bridge and replacing them with gold and silversmiths. To this day, jewelers are the sole merchants inhabiting Ponte Vecchio. 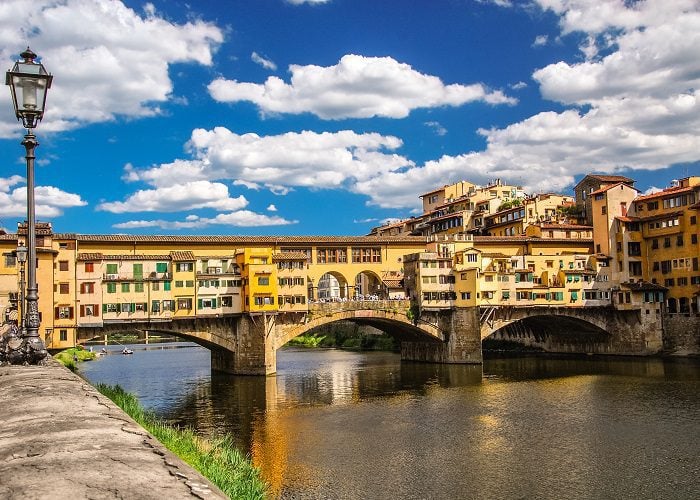 The larger windows that line the center of Ponte Vecchio were created in 1939 when Mussolini ordered the creation of one large viewing gallery for the Adolf Hitler’s visit. It is alleged that Hitler admired the view so much, that he had the Ponte Vecchio spared from destruction in 1944, destroying Florence’s other bridges in the process.

The Best Way to Experience Florence

The Ponte Vecchio is a patchwork of Florence’s history that tells the story of war, power and money. It is a landmark built during the Ancient Roman period, rising to prominence during the Renaissance. The most spectacular view of the bridge is along the river bank. Here you can stand in awe over the beauty of its structure and even notice a few peculiarities. To best experience the Ponte Vecchio, take our Florence Full Day Tour and experience this and the rest of Florence’s iconic landmarks. You can also enjoy a taste of Florence’s culinary delights with us once the tour finishes. 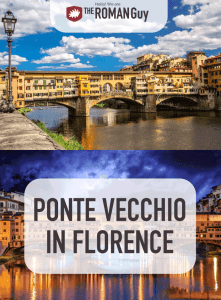 The Roman Guy was his name and Italian history and culture was his game. Now no longer a one (or two) man band, The Roman Guy is made up of a small team of Italy-loving and eager to please individuals. Together, we work to make sure that your time spent with us here in Italy is nothing but perfect by sharing ideas of new ways to visit and explore ancient sites! We even offer cool VIP Rome Tours including Colosseum Tours, Vatican Tours and Rome Food Tours!

Ten Astonishing Facts You Might Not Know About The Medici Family