Top 6 Things to Do in Verona, Italy 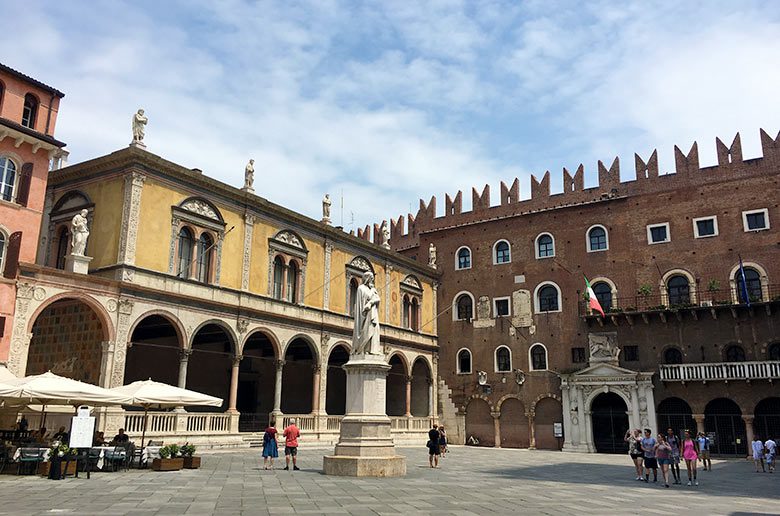 When it comes to things to do in Verona, your options are abundant. Among the most extraordinary hidden gems in Italy, the small city of Verona is a must-see place if you’re traveling through the Northern part of the country. Verona is often overlooked by travelers whose sights are set on Italy’s bigger cities. However, packed full of archaeological, cultural and historical sites, Verona is an incredible destination for a day trip from Venice or Florence.  Here are six must-see places in romantic Verona, plus some tips about where to eat and sip.

See an Opera at the Arena 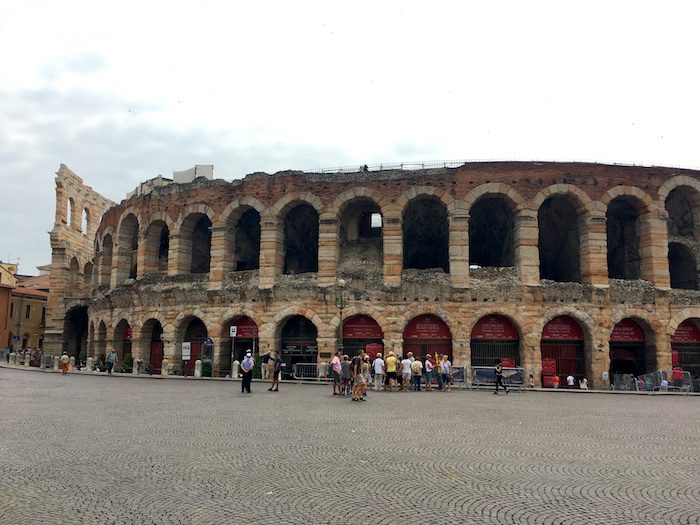 Located in Piazza Bra, the majestic Arena is one of the best-preserved ancient Roman monuments in Italy.

Constructed in the 1st century, the Arena di Verona served as a stage for brutal gladiatorial games in Roman times.

While you can’t catch a gladiator match these days, the Arena is now world famous for large-scale opera performances. In ancient times, the Arena housed nearly 30,000 people. While not as massive as the Roman Colosseum, the amphitheater comes alive during opera season.

Verona is known as the City of Opera because of the ancient Arena; its reputation is cemented by the tragic love story between young Romeo and Juliet.

For shows, timetables and schedules visit the official website: www.arena.it.

Among the best things to do in Verona, a weekend getaway to Lake Garda is a favorite among locals.

If you’re staying in Verona and not simply taking a day trip there, the lake is a mere hour away from Verona by car and 30 minutes by train.  With pastel houses and views of rolling green hills, the trip there is half the fun. One of the most jaw-dropping lakes in Italy, Lake Garda is also the largest. Covering an area of 100 miles and dotted with more than 20 picturesque borghi, or villages, it’s easy to see why this is such a popular holiday destination.

While some of the towns are popular, others are still off the beaten path.  Stop at the various villages that line the lake’s scenic shores for an unhurried exploration. Start from Lazise, proceed to Bardolino and finish at Peschiera del Garda, the most beautiful borgo overlooking the lake. If you don’t have a car but still want to reach beautiful Peschiera, it’s no problem. Just take a bus from Verona Porta Nuova Station to Peschiera or Riva del Garda.

For timetables and prices visit the official website: www.atv.verona.it or www.trasportibrescia.it 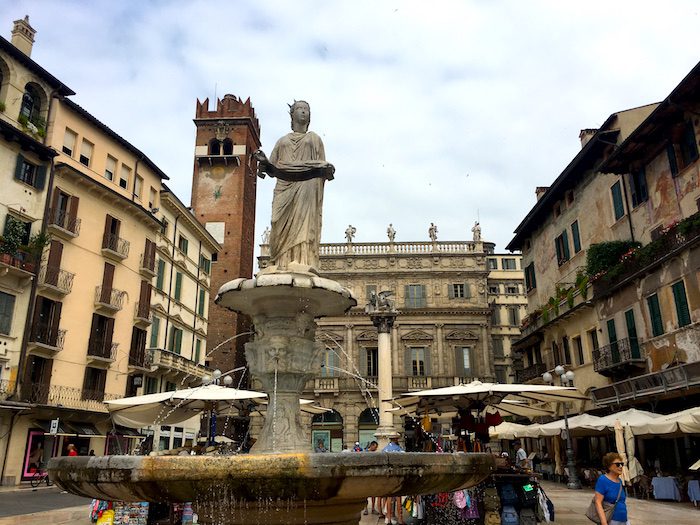 Piazza delle Erbe, which translates to “square of herbs”, is the oldest gathering spot in the city.

As the name implies, there’s all sorts of herbs for sale in the marketplace, as well as clothes, food and other souvenirs. All the major sightseeing attractions in Verona are clustered here, including Torre dei Lamberti, Casa dei Giudici and Palazzo del Comune. A short walk away are Romeo’s House, Juliet’s House and the Arche Scaligere.

Not only are most of the best things to do in Verona in or around Piazza delle Erbe, but it’s also a place to grab a coffee or glass of wine and rest your feet.

What to Eat in Verona

Verona has some of the best food in Italy.

If you’re in Italy during the hot summer months, cool off with some of the best gelato in Verona at Gelateria Amorino. The Italian ice cream shop is situated right on the Piazza delle Erbe and serves up organic gelato flavors that pack a punch.

Also in the square is Caffe Barbarani head here for some aperitivo and people watching in the evening. Caffe Barbarani is also an excellent spot to grab some coffee and fresh pastries in the morning, at lunch enjoy sandwiches and salads.

Wherever you end up eating though, honor the city’s culinary traditions by trying some Veronese specialties. For example,  Baci di Giulietta (Juliet’s Kisses in English), are a tasty type of chocolate and almond cookies named after Shakespeare’s star-crossed lovers. Try the liquor amarone and regional wines from Bardolino, Soave, Custoza and Valpolicella. Sample some rich risotto all’amarone, gnocchi sbatùi, and risotto al tastasal with authentic parmesan cheese. Your tastebuds will thank you. 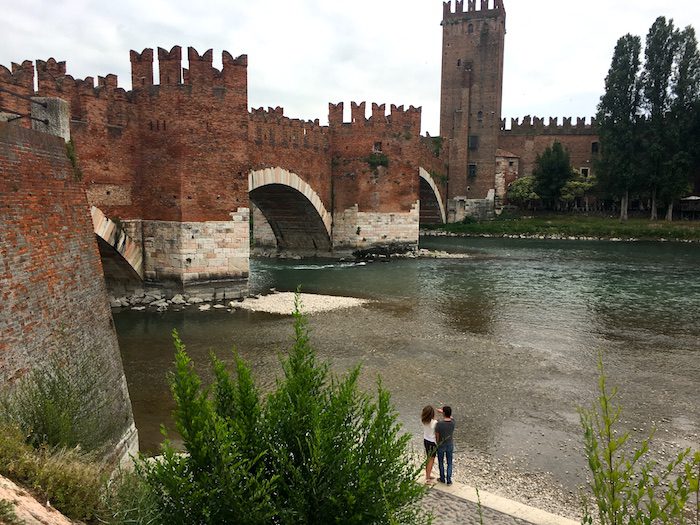 An ancient castle built to protect Verona during the Middle Ages, Castelvecchio is now the city museum of Verona.

Filled with ancient arts and other relics of the Veneto region, entrance is 6 euros for adults. For more information, including schedules, check out the Museo di Castelvecchio website.

After the fall of the noble Scaligeri family, the palace became a weapon deposit used by Venetians. Later, it became a war base during the French and Austrian domination of the city. Destroyed by the Germans in 1945, the bridge was Restored between the 1960s and 70s by Italian architect Carlo Scarpa. The palace is connected to the other side of the Adige river by fortified bridge, which was once an escape route from the castle. 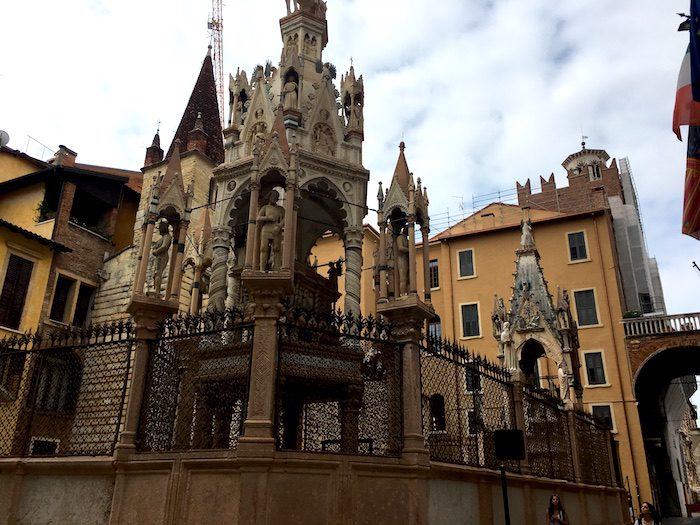 The Arche Scaligere , a staggering gothic arc next to Piazza dei Signori, is a funerary monument dedicated to the noble family Della Scala.

The Scaligere family, who ruled in Verona from the 13th to the late 14th century, were the most influential figures of medieval Verona. It’s here that the tomb of Can Francesco della Scala, or Cangrade stands. Because Cangrade was a close friend of Dante, “Paradise” in the “Divina Commedia” is dedicated to him.

Born and raised in Venice, Italy. I am obsessed with traveling and I always sleep with a suitcase under my bed. After studying abroad in the U.S, Australia and France, I've moved to Rome led by a passion for art, literature, and the italian culture. I am passionate about communication and branding and my #1 skill is making an appropriate Spotify playlist for every occasion.

How to Prepare for Italy in Winter

How to Celebrate Christmas in Italy