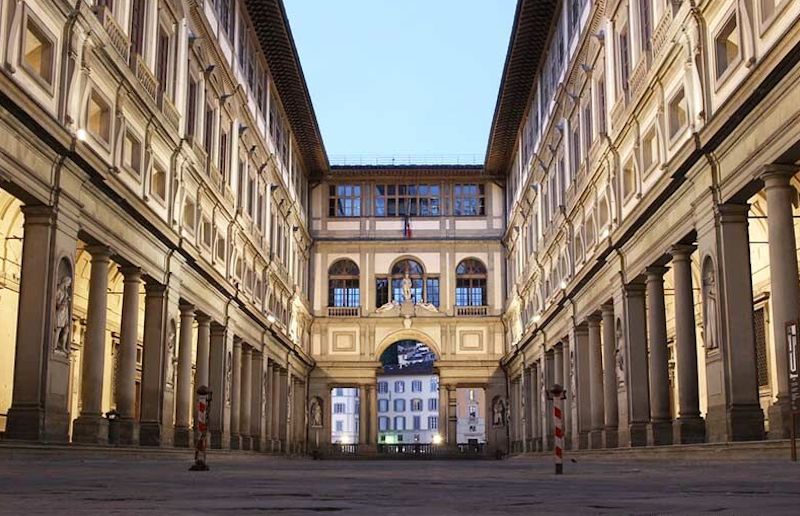 With more than two million visitors per year, the Uffizi Gallery is one of the biggest attractions in Florence, a real gem that you cannot miss while visiting the city. Planning a visit to the Uffizi can be hard because of its never-ending list of masterpieces. Luckily, we’ve been able to put together a list of the Uffizi Gallery’s main highlights. In this guide, you can find our top picks of the main artwork inside of the Uffizi Gallery as well as how to obtain skip the line Uffizi Gallery tickets.

In this blog, we”ll explain:

The best artworks inside of the Uffizi Gallery 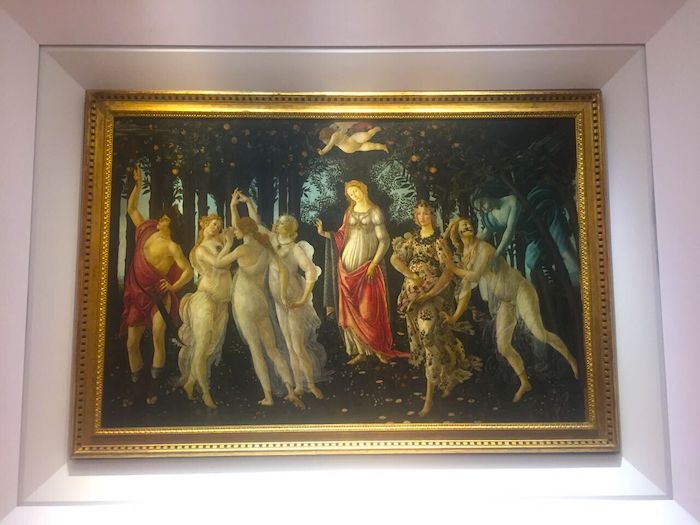 Originally painted for the Medici Family’s villa in Castello, Botticelli’s Spring is now at the Uffizi Gallery and still astonishes people every day. You may also know this painting as Botticelli’s Primavera. Painted in 1482, this work has to be read from the right to the left. The story begins with Zephyr, the spring wind, and the nymph Clori. Their daughter, Flora is portrayed as the Spring itself. In the middle, Botticelli portrayed Venus as the symbol of the purest love. Above Venus you might notice the three Graces and Mercury on her side.

All of these characters are an allegory of members from the Medici family. Mercury is Lorenzo di Pierfrancesco de’ Medici, the committee of the Botticelli painting. The Grace in the middle portrays Semiramide Appiani, Lorenzo’s wife.
This painting was initially committed to Botticelli by Giuliano de’ Medici to celebrate his newborn son. After Giuliano’s death in the “Crazy Conjure”, Lorenzo di Pierfrancesco committed the same painting to the artist to celebrate his marriage. 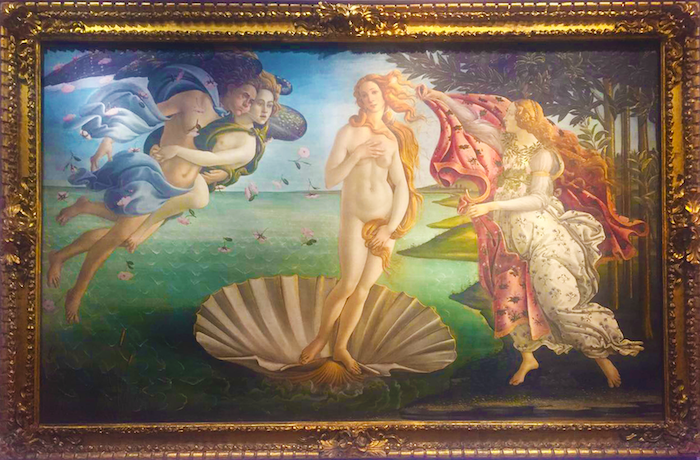 As Michelangelo’s David is considered the best artistic example of male beauty, Botticelli’s Venus is considered the greatest female beauty example in art. As for the Botticelli’s Spring, even Botticelli’s Birth of Venus was initially painted to be displayed in the Medici’s villa in Castello. In this artwork commissioned by Giuliano and Lorenzo de’ Medici, Venus is portrayed half naked, standing on a shell, about to enter the world. Behind the goddess, Botticelli portrayed the Spring wind, Zephyr and another female figure. Some say that the woman with him could be Clori, the nymph, while some others suggest that the woman could be Aura, a personification of the fresh morning breeze.

What Botticelli wanted to remind to the spectators was the importance of love as the greatest power on earth. For some art critics, such as the Italian Giulio Carlo Argan, there might be also a correlation between the water of the sea in the painting and the water used for the Christian Baptism.

Painted in 1597, this work perfectly expresses Caravaggio’s pain and obsession at the time. The protagonist, Medusa, is portrayed while she’s screaming because her head’s just been cut off by the hero Perseus. According to the myth, Medusa was able to petrify everyone looking into her eyes.

What’s so special about this painting is the optical effects that Caravaggio used to give even more drama to the scene. Thanks to the proper use of lights, the artist cancels the bad effects caused by the convex shield and, on the contrary, the spectator has the impression of looking at a Medusa’s concave medium. At the same time, the artist underlines the drama of the situation by pointing the light directly on Medusa’s face.

The sense of tragedy displayed by this work should be an expression of what Caravaggio was feeling when he painted Medusa. Accused of murder years before, the artist lived his life hiding from the state in order to not be caught and killed. At some point though, he started to feel his end close and his work got darker and darker.

At the Uffizi Gallery, Leonardo da Vinci is so important that there is a whole room dedicated to him. Once there, you might observe the beauty of his version of the Annunciation, a painting able to connect art with science.

Painted in the 15th century, this work portrays Mary and the Angel outside of her house. Usually, this scene took place on the inside of the house, but Leonardo opted for a revolutionary choice. By carefully observing the details, you might notice a wide floral composition with several different types of flowers.

Also, Leonardo da Vinci mastered the modern concept of perspective using all the geometry ideas that were slowly coming into the art world. The perspective is underlined by a smart use of colors. The artist decided to softly blend the paint to underline the distance from the first two characters. 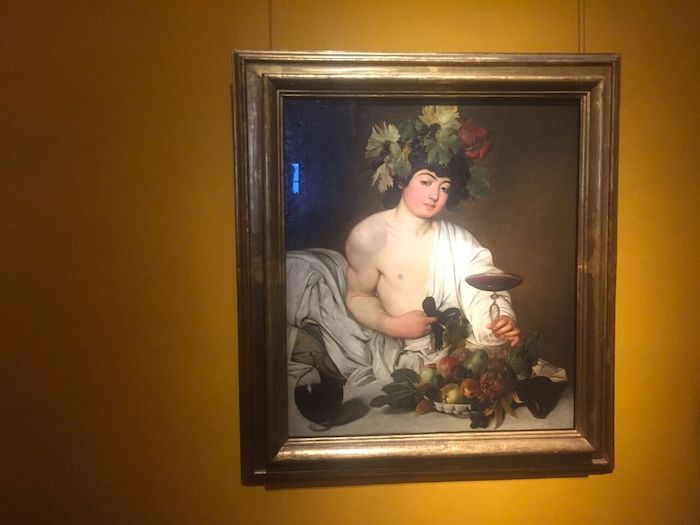 Let’s come back to Caravaggio. Located in room number 90, the Bacchus is a painting created by a young Caravaggio. At this stage of his career, the artist was still using soft lights and less intense scenery. Bacchus’s face is relaxed, looks directly at the spectator as to invite him to join the spectacular amount of food in front of him.

With this painting, Caravaggio wanted to invite the observer to enjoy life and to reconsider the importance of friendship in order to live peacefully and joyfully. Bacchus’s figure is inspired by ancient Roman and Greek art. His beauty reminds the classical sculptures of athletes and heroes produced during the classical age. Also, Caravaggio proves his limitless talent by carefully painting all of the fruits in front of the protagonist and mastering the lights in order to define all the elements. 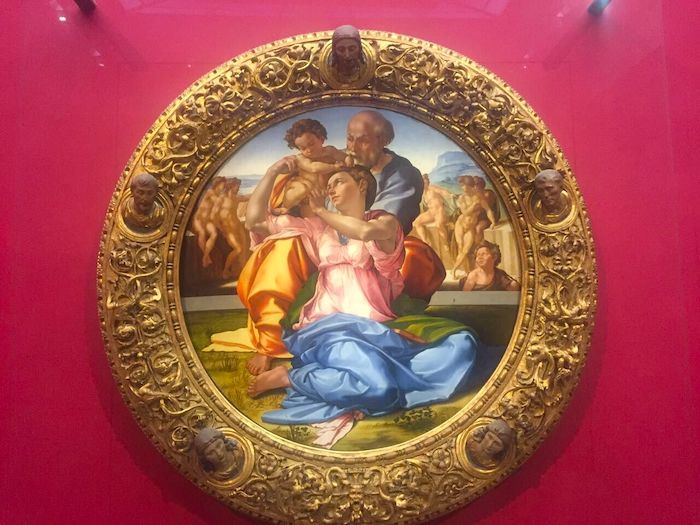 Displayed in the special Michelangelo’s room at the Uffizi, this painting is the starting point for the future of Mannerism. Still preserved in its original frame (probably drawn by Michelangelo himself), this work shows the Holy Family with an innovative disposition of the characters. In the front, you might see Mary, and for the first time in history, not Jesus. The woman is slightly turned to pass Jesus to Joseph on her back.

The bodies and the colors of their clothes represent Michelangelo’s typical artistic style. Jesus has a more human attitude as he’s portrayed playing with his mother’s hair. Mary’s body’s disposition presents a sort of tension that finds its peak with the head of Joseph. This body’s torsion will be the base for the upcoming art trend known as Mannerism.

If you’d like to visit the Uffizi Gallery, we recommend taking a guided Uffizi Gallery tour to mazimize your time in the museum and skip the line to enter. If a solo visit is more your style, here’s some important information:

While this information is provided for free, we also sell tours at pretty reasonable prices. Why not tour one of the best museums in Florence with a professional art historian? On our skip the line Uffizi Gallery Renaissance Florence Tour, you can. This tour not only includes skip the line Uffizi Gallery tickets, but also insightful descriptions of the museum’s main attractions. While visiting the wonderful City of the Renaissance, be sure to check out our other Florence tours to ensure the best trip possible.

Castles in Italy: Castello delle Serre and other Tuscan Castles

Rooftop Bars in Rome Near the Vatican