Home > Our Best Virtual Tours of Italian Cities and Museums

If you’re stuck at home, or just want to get excited for your upcoming trip to Italy, then we’ve made several virtual tours with our top guides to bring you through many of the most exciting places in Italy. Just because you’re at home, doesn’t mean you should miss out on the art and culture of Italy.

Each of our virtual tours is an hour long, and consists of a guided exploration of some of Italy’s top highlights. With interactive polls and quizzes, it’s an incredibly engaging experience. After your guided tour, you’ll have the opportunity to ask any questions you may have in a live Q&A.

On this excellent tour, you’ll experience the highlights of any great Florentine experience all in the comfort of your own home. You’ll explore the work of the Accademia Gallery, and its centerpiece: the Statue of David. With your guide, you’ll learn the history of this seminal piece of art, which is essentially the standard when it comes to great sculpture.

“We have visited Florence before, and were still able to experience something new. ” – Trevor S. in his review of the Virtual Tour

You’ll see other works found in the Uffizi Gallery, which houses some of the most celebrated and iconic works of Renaissance art. There is tons to see here, and you’ll want to view it with a guide to get a full sense of the stories behind each of these pieces of art. Such iconic artworks like Sandro Botticelli’s The Birth of Venus and Caravaggio’s Medusa will be included, as well as important works by Renaissance masters, Da Vinci, Raphael and Michelangelo. 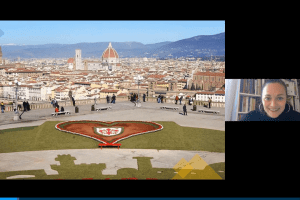 After that, you’ll explore other icons of Florence, like the Duomo topped by Brunelleschi’s impressive dome, the largest in the world to be built entirely out of brick. It was and remains an incredible feat of architecture and engineering, and something that is certainly worth exploring with a guide in order to appreciate the sheer achievement of its design. you will also learn about other parts of the Piazza del Duomo such as the exterior and interior architecture of the Cathedral, Baptistery and Belltower.

The tour goes on to include many other sights of Florence, like the Piazza della Signoria, the Piazza di Santa Croce and the famed Ponte Vecchio. It’s the kind of experience that must be taken with a guide.

For those looking to explore the Eternal City without having to take a step outside, this tour covers everything you need to see. It begins with the Colosseum, and your guide will bring you through a virtual tour of every level of the ancient stadium. From the arena floor to the complex of tunnels that stored the gladiators and wild animals that competed for the crowds, this tour guides you through the complex machinery that made the Colosseum run. Along with that, you’ll gain a deep understanding of how the Colosseum figured in the lives of many Romans, from the Emperors who presided over the festivities to the slaves who fought in its bouts.

“I was skeptical about the whole “virtual tour” idea, but this was an amazing experience that brought back many memories.” – A Happy Customer in their review of the Virtual Tour

The tour then moves on to the Roman Forum, which was essentially the downtown area of the Ancient Roman metropolis. Your guide will remark on the ancient temples and ruins that now occupy this once-bustling area, including the Temple of the Vestal Virgins, Temple of Romulus and the Temple of Julius Caesar. The Roman Senate House can also be found here, a place where many of the most important political decisions of history were made. 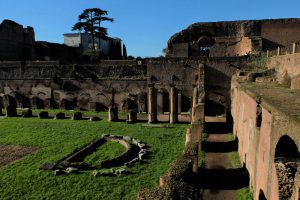 Then it’s off to the Palatine Hill for the last leg of the tour. The place where many of Rome’s most rich and powerful kept their lush villas, the hill now occupies a chiefly historical place. It is here where your guide will tell you the stories of the ancient Emperors who once lived there, and the consequential lives that they once led. It’s a great place to end the tour before your Q&A session with your guide.

Being able to see the amazing works of art kept at the Vatican Museums is an incredible experience, but seeing them with a guide really brings out the stories behind them. On this virtual tour, you’ll peruse the work of the Enclave City, along with a licensed tour guide with expertise on the art that’s kept there.

There’s tons to see. Your guide will bring you through some of the most celebrated collections. Rooms such as the Borgia Apartments display the opulence and power of a papacy long divested of its supreme authority. The Gallery of the Maps, which are included on the tour, have stunningly accurate depictions of the Italian Peninsula made far before GPS technology. They are stunning to behold, but particularly fascinating to go through with a guide who can unveil their hidden meanings and history.

The main event here is, of course, the Sistine Chapel. While it may not be quite like standing under the ceiling in person, going through the detailed paintings with a guide is the best way to understand every nook and cranny of these stunning frescoes. In person, guides are not allowed to talk while in the Sistine Chapel, but in our virtual tour they’ll be able to explain many facets of these beautiful works. 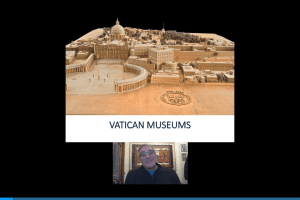 Finally the tour ends with an exploration of St. Peter’s Basilica, the largest church in the world. You’ll see Bernini’s Baldacchino, an incredible work of stone in the Baroque style, supposedly built atop the tomb of St. Peter. Also inside is Michelangelo’s other masterpiece La Pieta, which features some of the most accurate features ever set to stone. After your tour, you’ll have plenty of time to ask questions in your live Q&A!

Right near the end of the 1st century, a huge eruption of Mount Vesuvius sent flaming hot ash and fire down on the seaside towns of local Naples. It destroyed everything in its past, particularly the small resort town of Pompeii. With your guide, you’ll explore this fascinating and haunting place, gaining the kind of historical perspective that brings ruins to life.

With your guide, you’ll see why this town has been visited and revisited by archaeologists for years. It has some of the most well-preserved ancient ruins that can be found anywhere in Italy, and in particular features several ashen figures: residents of Pompeii flash-frozen by heat and ash in the positions that they fell. With your guide, you’ll explore these ancient ruins, revealing the stories of the people who lived there that have not been lost to time, despite all odds.

On this virtual tour of the Borghese Gallery in Rome, you’ll learn the fascinating history behind one of Italy’s most celebrated artists: Michelangelo Caravaggio. A man with a tumultuous life, he was accused of even killing a man over a tennis match. With an expert guide, you’ll explore his life and his dynamic and dramatic paintings for yourself.

With his mastery of the “chiaroscuro” technique, Caravaggio managed to capture intensely dramatic scenes of darkness and light whose power can still be felt through a computer screen. He was one of the leading lights of the Baroque period of Italian art, and it’s clear to see why. With your guide, you’ll hear the story behind the man, a promising apprentice to banished criminal. It’s a life’s story as dramatic as the paintings it produced. 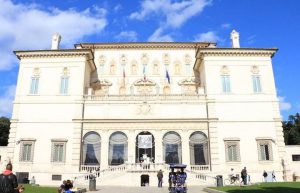 The tour then moves on to another of the Baroque masters: Gian Lorenzo Bernini. There is no better sculptor who captured the voice of this period better than Bernini. With just a few simple tools and blocks of stone, Bernini crafted some of the most enduring pieces of Renaissance sculpture. With your guide, you’ll explore some of his most iconic works, and gain a deep understanding of why they are still celebrated to this day.

The tour doesn’t stop there, however. Along with these Baroque masters, you’ll explore the works and lives of other great artists, such as Raphael, Correggio and Titian. There’s tons to see in the Borghese gallery that it can be pretty overwhelming. With a licensed guide, however, you’ll be able to uncover the stories behind these great works of art and the men who made them. It’s one of the most unique experiences you can find, and one we definitely recommend!